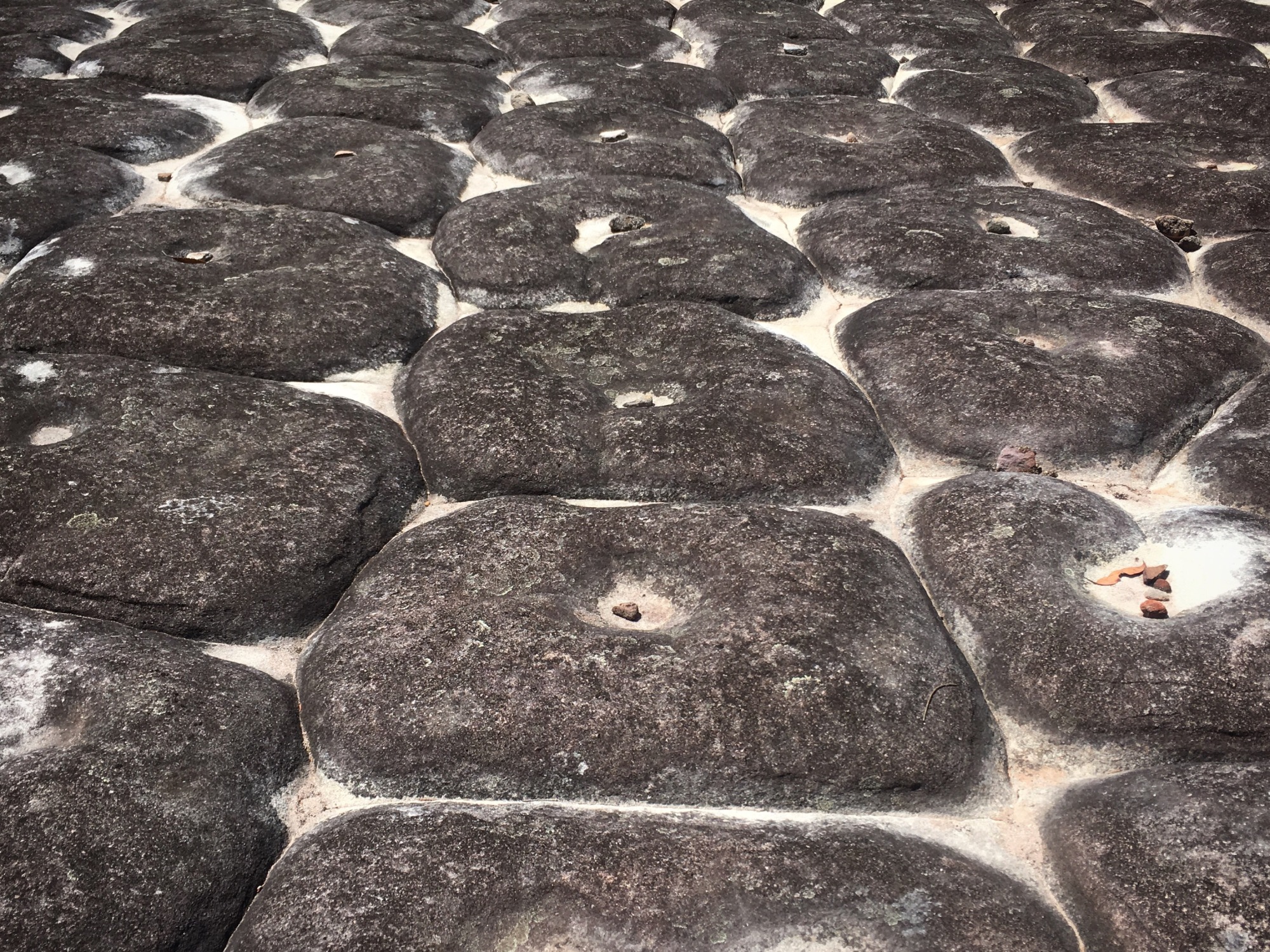 This trail proved to be quite an emotional, reflective experience. There is a long history of aboriginal inhabitation of Berowra,NSW and the surrounding area, but most of the people were wiped out by disease and actual murder after the arrival of the British & other Europeans. I’m becoming quite interested in learning about their history and way of life before it was taken away from them. The idea of living a wilderness lifestyle has its appeal and it seems impossible to achieve in the modern world, unless one has excessive amounts of money to buy that lifestyle. So it doesn’t happen much. There were rumours of engravings near Berowra station but I had no idea where to start looking for them.  Then one day whilst searching my geocaching app for new locations to explore, I noticed a funny little ghost symbol that marked the location of Berowra’s first virtual geocache. Reading the logs it became apparent that the route to this geocache led past the rumoured engraving sites! Well this was immediately put on the to do list!

A spot finally opened up in my weekends so I decided to head off. The unmarked track began just over the freeway bridge and led off to the left rather than straight ahead where the usual signposted tracks headed. It was a bit grotty at first, with the first kilometre passing a hobo camp (with a fantastic abandoned car on the edge of a cliff), then followed alongside the freeway for a while. The vegetation in the area and the curious little burrows gave me the impression that bush rats live there, although it could also have been echidna country, I suppose. I saw neither. There was a lot of roadside litter. I had hoped to use this walk as my first “hike it out” walk but I forgot my gloves and garbage bags and I frankly would have needed a skip! I pledged to leave the areas that I walk in a better condition than I found them so I hope to be able to do something more significant in my next hike. I did carry out a few plastic wrappers from further down the trail so that’s something at least.

Anyway, after half an hour or so the trail turned away from the freeway and into the bush. Immediately, the trail was overgrown and I had to push through a wall of plants to get to the clearer trail on the other side. Then I found myself swinging my poles around to clear huntsmen webs from the path. The spiders were still young but in a few months would be much bigger. 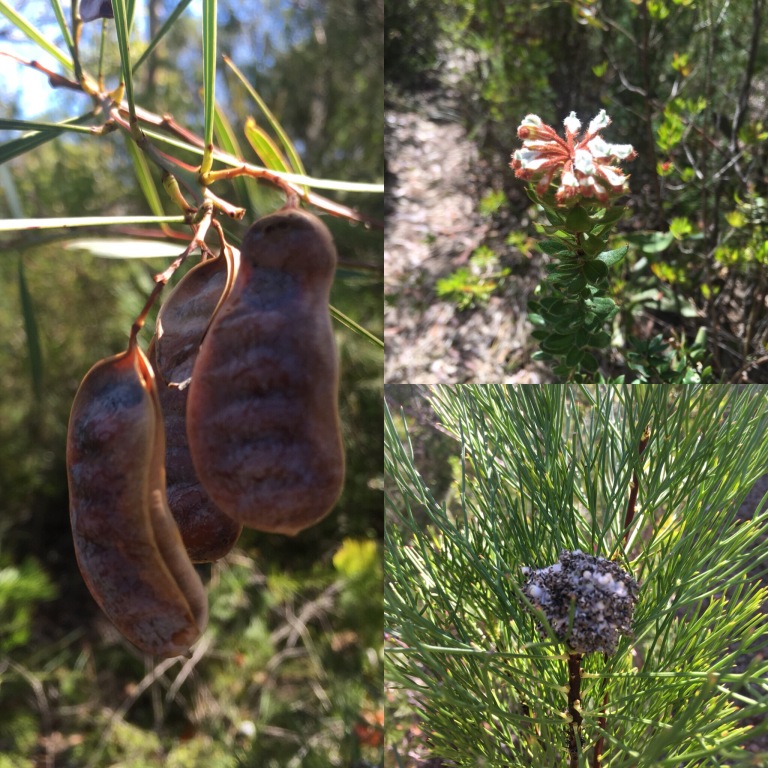 I was walking along a ridge that occasionally opened up to reveal spectacular views of the valley. I veered off the track numerous times to explore some wide rock platforms  but I did not find any engravings, which made me wonder what it was that made a good site for such things? I assume that this spot was too far from the water to be of use.
The first tessellated rock platform appeared and I once again scoured it for engravings but found nothing. After around two hours of walking (I was slow due to picture taking), I finally came upon a smooth rock surface that had the first of the engravings. It was a hunter and a boomerang. Further along was a sting ray, a whale (or a fish?), a wallaby, and I think a sea turtle. I was thrilled but I couldn’t figure out why this rock was chosen over any other.

I snapped some pictures but it is hard to see the engravings in them.

I then carried on further until I reached my destination – the virtual geocache that was Shark Rock. It was amazing! It was the best example of a tessellated rock I’ve ever seen. Huge pillows of rock were laid out in a regular pattern separated by deep groves. On exploring further, there were more engravings, this time showing what I think were shields and wallabies. I had not expected to find any engravings on Shark Rock itself so I was thrilled! 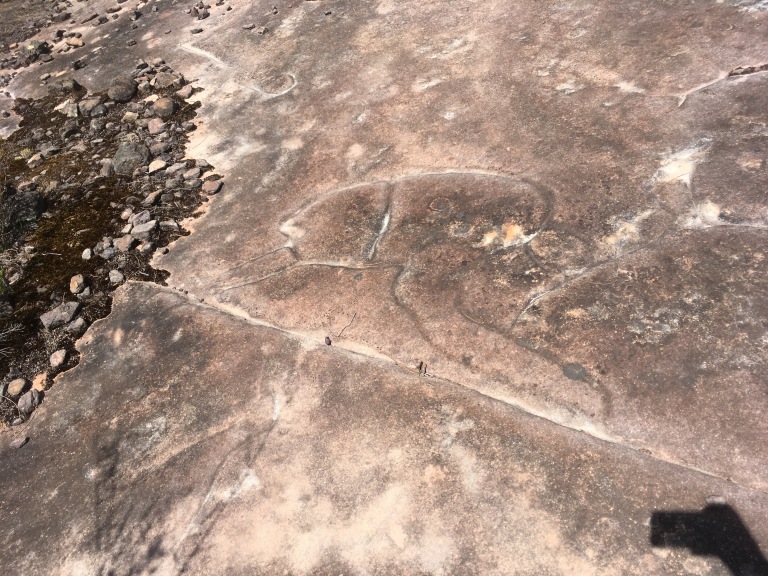 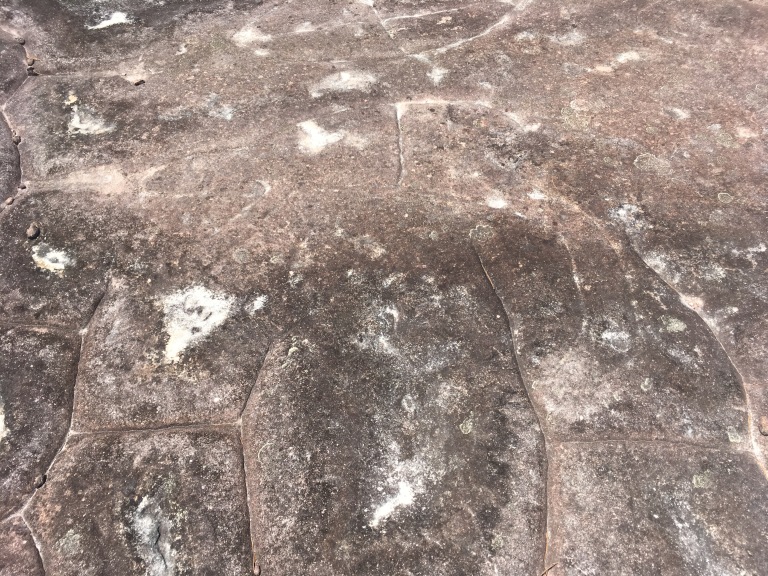 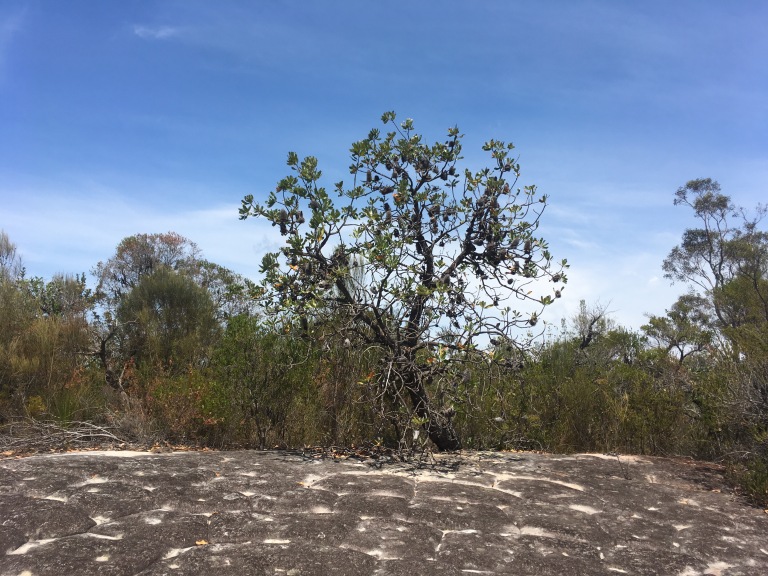 In order to claim the cache I had to climb to the highest point and locate some old telephony wire anchor point. I found them, snapped my picture for the log, then sat down to each lunch with the rock and the valley spread out before me. 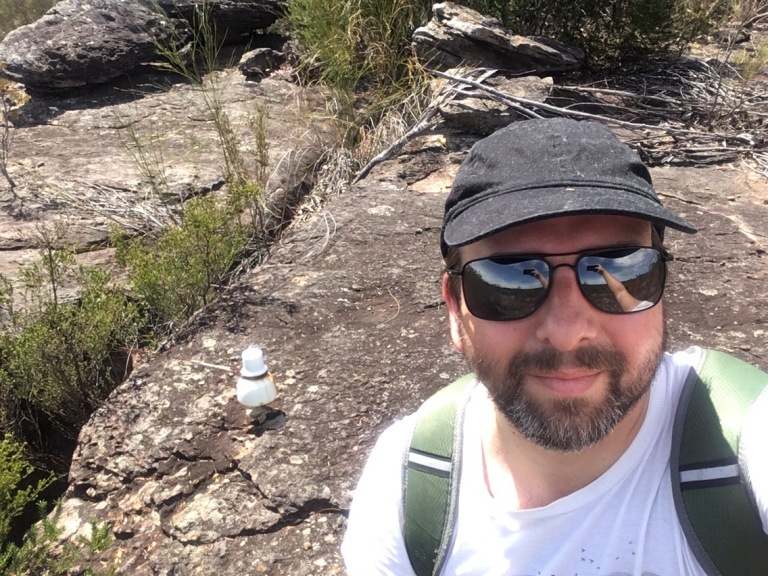 I spent some time exploring and could see a trail leading away from the rock, perhaps towards an old trig station that is meant to be out there.

I then headed back at double the pace, not being slowed by picture taking anymore! 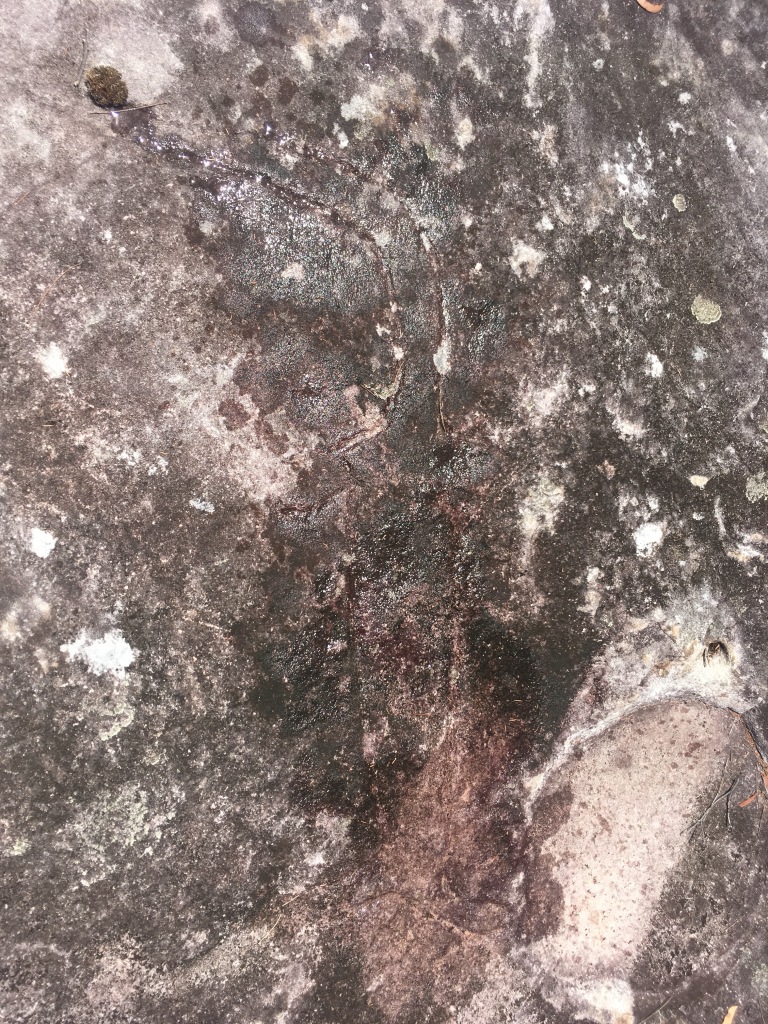 The walk back left time for reflection. First in my mind was whether to actually tell anyone about this spot. Should it be kept secret to protect it or should people know about it to prevent future developers tearing up the place? I wouldn’t want to write about it the find out a week later that someone had defaced it. I decided that the information was already out there as it was a remote enough location to keep the idiots out. I do ask anyone reading this and looking to head out there to treat the area respectfully and to leave the area as you found it. Leave no trace. The engravings will fade away in time so it is important I think to see them and to reflect on the lives of those whom created them.

Second on my mind was the logs on the geocache left by others whom had found the spot. Particularly there was one left by “paul_the_hippy” and detailed his struggle with depression and how being out in nature and the joy of geocaching helped him get through the tougher times. This was a particularly tough time for him as he wrote about being in tears after seeing the engravings and he essentially blacked out from the emotions he was feeling. He woke up completely naked on the rock before pulling himself together. I found it astonishing that he shared such detail publicly, that his life’s events had put him into such a state.  In my own log, I left him the phone number for lifeline, 131114. I wish him well.

The third item on my mind was the hobo camp that I walked past on the way out and on the return. No-one was at home but there was writing clearly visible on some rocks. “A Daniel U is not delusion”, “my nam is tu mor”, “Aversion Track- won’t matu- averting your own non exist”. There were also some names and some other notes scattered around. This person lives rough and is struggling to exist. Perhaps a tumor affects him or has taken someone from him. He has seen people pass through the camp and avert their gaze but he is saying he is here and is leaving his mark.

I struggled to put all this together, not expecting to be so emotionally affected by this walk. I see now that this walk is the story of lost lives and the wilderness lifestyle that they all share. The aboriginal people and their devastating, stolen history, Paul the hippy and his journey into the wild to find a way to cope, and the hobo, Daniel (?), whom lives in the wild at arms length from civilisation, due to his own difficult and possibly tragic circumstances. I could be over interpreting but this is where my thoughts went. 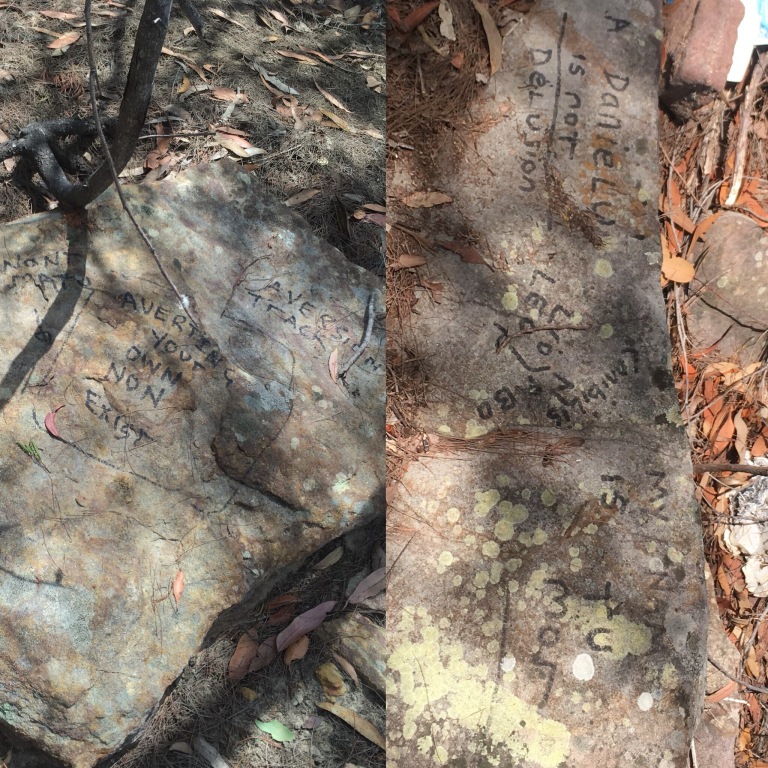 I often wonder how we could live a wilderness lifestyle but retain the benefits of the modern world (medicine, communication etc). I don’t think I’ll figure that out but it is interesting to know that the wild can not only heal but it can also reveal.

Thank you for indulging me. One of the reasons I write this blog is to reflect on my experiences and to ensure I remember them. I want my children to be able to read this and understand what was important to me. We all need to be remembered and we all need to celebrate who we are, even if we fall

12 thoughts on “Lost Lives and Aboriginal History Along The Shark Rock Ridge Trail: A Virtual Geocache”