The Inca trail, or Camino Inka, is a 43 kilometer trek through the Andes mountains of Peru, following one of the many trails built by the Inca’s, leading to the amazing mountain-top ruins of Machu Picchu. We signed up to do the classic four-day trek with adventure travel company Intrepid Travel and set it up so it followed directly on from our Galapagos Islands tour. Vikki and I had trained for the hike for several months, doing good walks in the Blue Mountains, Coogee Beach to Watson’s Bay, Spit to Manly and some simpler walks around Sydney. We thought we were ready. We struggled! We also purchased light but warm sleeping bags, our backpacks, new shoes, and hit up Kathmandu for fleece tops, thermal underwear, good rain jackets and other gear. Vikki, applying her girl guide know-how, introduced me to the concept of layering, which we definitely needed.

Our companions on this hike were Amy and Kathryn from Australia whom had joined us from an adventure of their own that included snorkeling or scuba diving if I remember rightly, and Sam who was touring South America at the time and had seemingly mastered the art of haggling taxi drivers for fares (I hadn’t considered doing this until she mentioned it). The five of us were led by Celso, our guide for the trek. Our two tripmates from the Galapagos tour, Peter and Dave (I think that was his name)  were to take the Lares trek instead of the classic trail due to trail permits being unavailable. We were introduced to our guide Celso at the hotel the night before we left. He gave us duffel bags to put our sleeping bags, clothes and other overnight essentials into for the porters to carry on the trail. We would carry our rain jackets, water, camera’s and other necessities in our day packs. In the morning we dropped off our duffel bags, collected our hiking poles – the first time I had used them, and were given a bag of snacks to munch on between meals.

Our hike began with a short stroll from our hotel to the train station. The official start of the walk was marked by a signpost alongside the train tracks and we all posed for group picture. We then walked across a bridge over the river and the trek began. The trail was gently rising and did not seem impossible to accomplish at this point. Vendors were dotted along the trail and our tour company Intrepid made a point of not stopping at the first, rather it spread its business out to those vendors further along to ensure fairness of trade. We stopped at one, ate a snack and purchased a Gatorade. They also sold Inca Cola, the local soft drink that sold purely based on its name. Our guide pulled some bugs from the bushes, smushed them and marked us, using the remains, with a dot on our nose. Thankfully he explained! The bugs were used to make cochineal, a crimson dye used to colour fabrics, of which Peru was the largest exporter. Celso was using it to mark his group. Ok fine – we thought we will wear it with pride… until we looked at our pictures on the camera and realised we looked like complete twits! Oh and somehow whenever we go places I always manage to befriend a mangy cat and the Inca trail was no exception (I look as mangy as it in the photo below!). 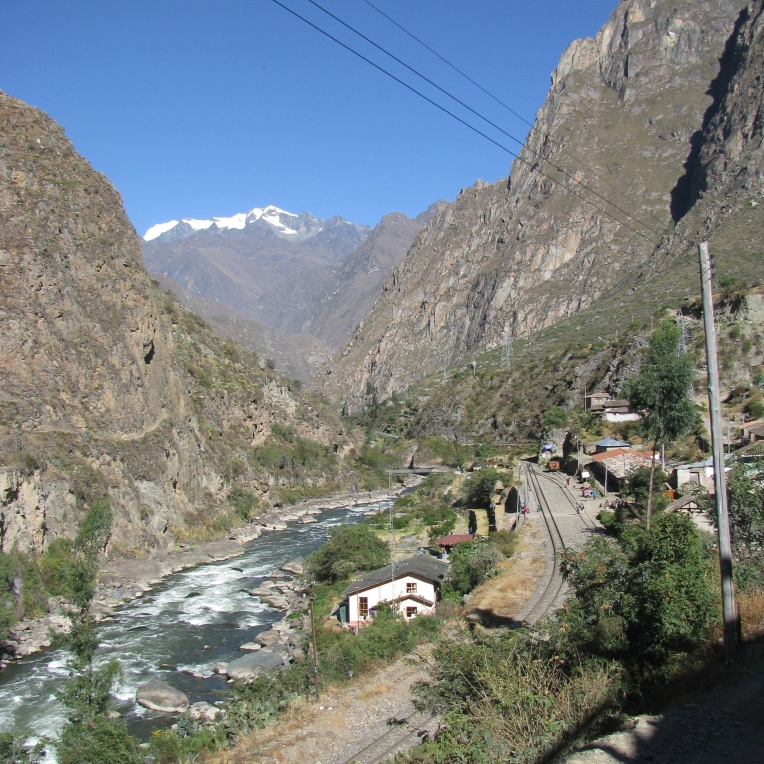 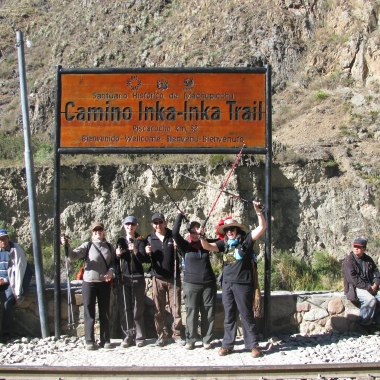 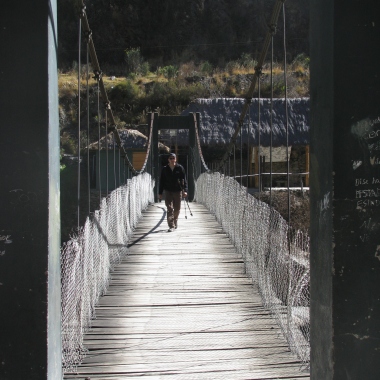 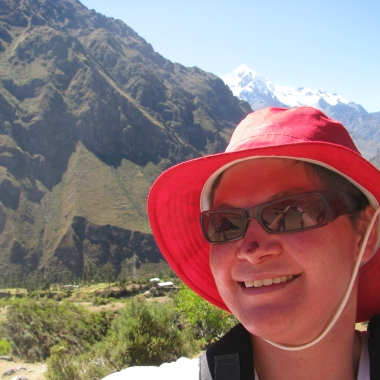 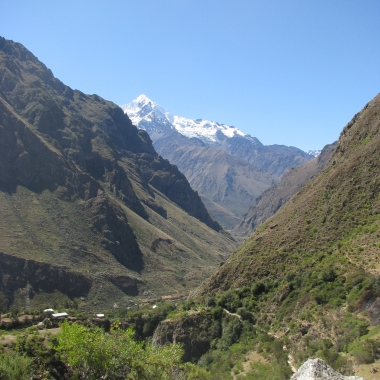 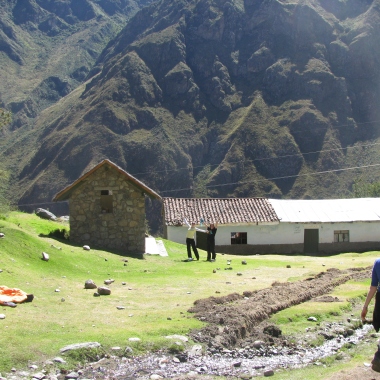 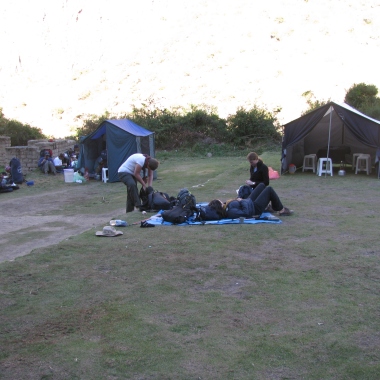 As we walked on, we saw our first major ruins, characterised by farming terraces. Some boulders that were too large to move were simply left in place and the terraces built around them. It was a nice introduction to the wonders we would see in Machu Picchu! It was quite hot when walking but we felt the coolness in the air whenever we stopped. We also tried to chew on coca leaves to ward off altitude sickness. I’m not sure they actually did anything other than taste funny. 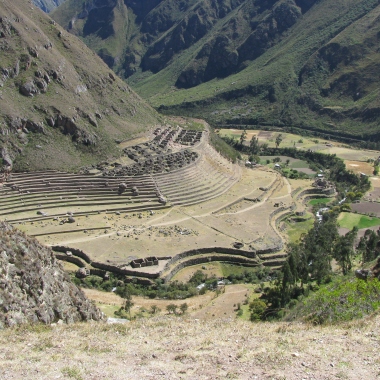 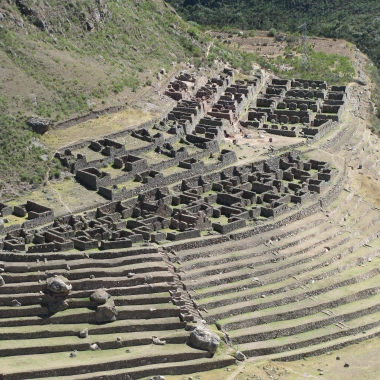 Our first campsite was at 3100 meters and had an amazing view of Mount Veronica in the distance. Our porters had already set up our tents and some larger tents for our evening meal. The temperature was dropping and we were feeling it now that we had stopped walking, so we put on our thermals and fleeces and checked out the campsite. There were pit toilets. I’d never used a pit toilet before. It wasn’t pretty. At least we didn’t have to dig a hole as I now have to when I’m out in the wilderness. I’m not sure I would have been ready for that back then! I recall that one of the girls was ill so that could not have been very pleasant for her.

There was a lady and her son at the site with their pony. I think they lived nearby. I hope that they were used to tourists snapping photo’s, which we shouldn’t have done, but that kid was cute! We also took the obligatory foot photo – those shoes looked so new! It has taken eight years to destroy them  (they succumbed to thistles in the Snowy Mountains) so they were a good choice.

We ate dinner in the dining tent. It looked like beef stroganoff but we had our suspicions. Back in Cusco after the trek we ate alpaca and chips and the penny dropped. We are now convinced we ate alpaca stroganoff! The meal was a three courser that started with a soup and ended with desert. How on earth the porters carried up the marquise tents, stools, cooking equipment and all our gear I’ll never know. I don’t think they stashed it up on the mountains as there were as many porters as guests so I think they carried it.

The cold soon drove us to our tents. I was surprised that I had to open my sleeping bag a little to let the heat out – I had expect to freeze. My thermals probably tipped me over. I was very pleased with our gear choices.

The setting sun made the mountains shine and the beauty of that scene is burnt into my memory. We tried to get some rest as we had an early start ahead of us for the long and challenging day to come. 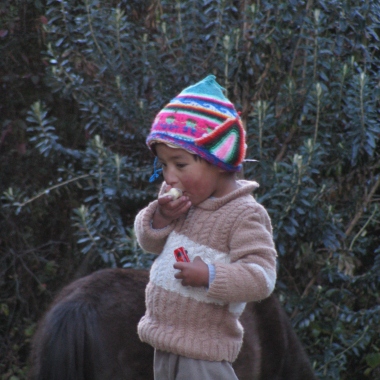 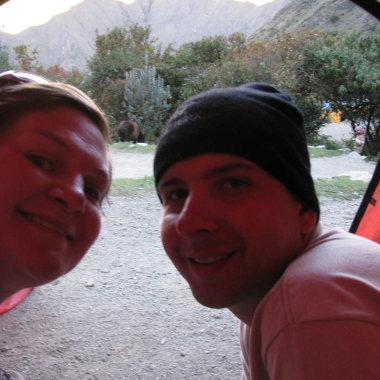