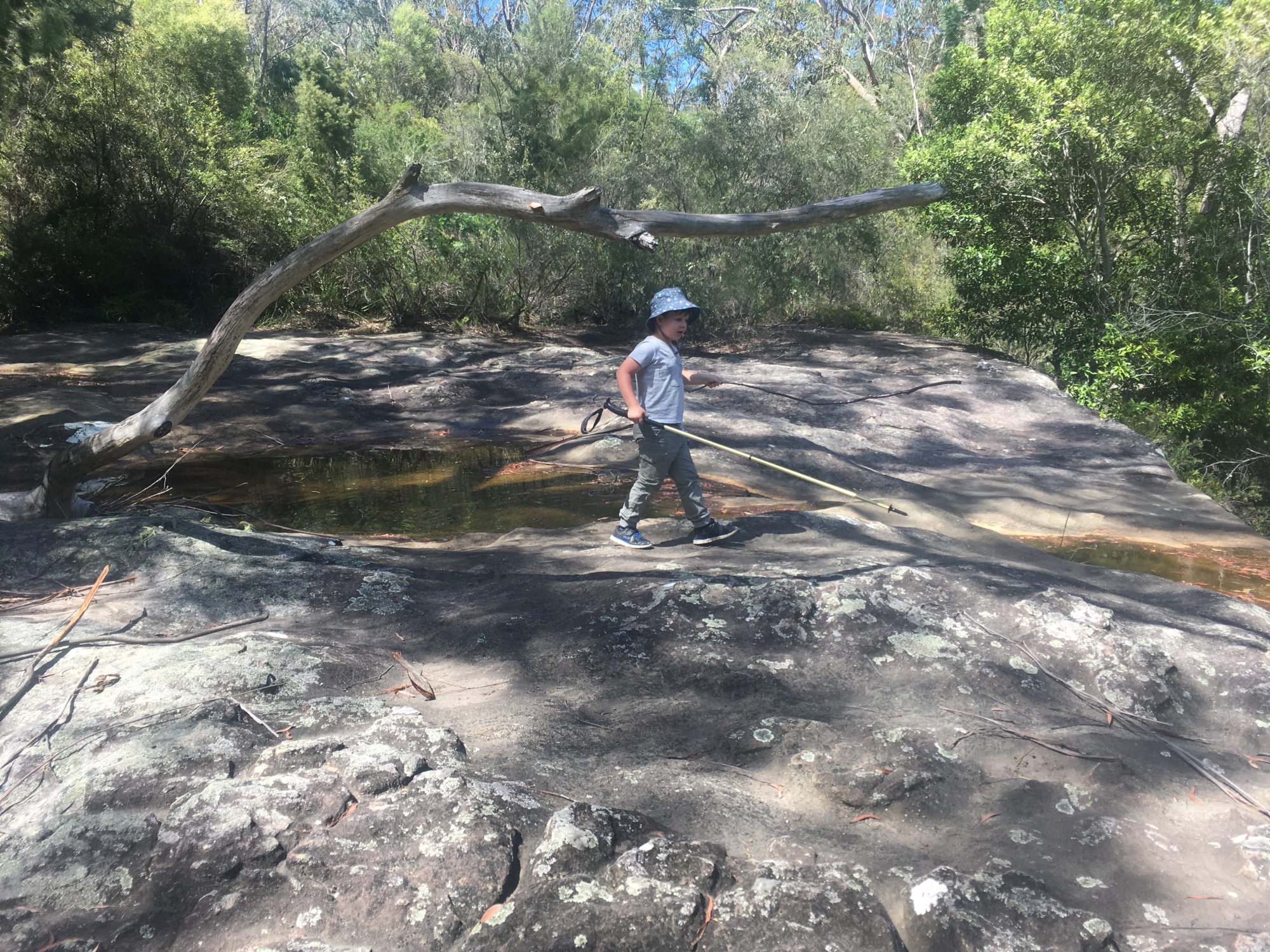 When I designed the 12 Hike Challenge I knew the end of the year would prove difficult to find time to walk, so I set a Waterfall walk as one of my goals knowing full well that there was a small waterfall hidden away in Berowra that I could reach at any time. So this weekend my 5 year old son and I headed out together, with me wanting to reach the waterfall and him wanting to reach an old car hidden in the bush.

I have done this walk a few times now and it is fantastic to take kids on. For them it is challenging and rewarding, and at three kilometres round trip it is within their capabilities.

We drove to the end of Warrina Street, Berowra NSW, and entered the start of a Firetrail. Actually it may not be a true Firetrail, more a maintenance trail for powerlines. Maybe both. The walk begins on a quite wide track passing by some low cliffs that mark the end of housing and the start of the Berowra bush. We passed a small trail to the left that would later take us to a creek and then on to the old car. Further down we encountered several rock platforms that opened up the views a bit. I always expect those places to be covered in aboriginal engravings and always wonder why one rock place is chosen over another. At the end of the vehicle track was a power line and just to the left of that was a small trail that led into dense bush.

The track was quite thin and had lots of scratchy plants but my son used his hiking poles to push them back and make a clear path.

He started making a “bushwalking review” video using my phone. It’s quite cute and broke up the trip a bit so he wasn’t tired. I won’t share it here though as not everything needs to go on social media. We were passed by two gentlemen who I later suspected were setting up the Berowra Rogaining event that would happen the next day.

My son rested again on a rock further down in the valley and told me (or his “audience”) all about gumnuts and gum leaves and said that millipedes liked the brown leaves.

We finally reached the waterfall only to discover it was just a trickle. The path comes out at the top and we played a game together in the rock pools where we fished for eels (strips of bark) using our hiking poles. Another family had joined us with their dog. It seemed this spot was very popular in the morning! 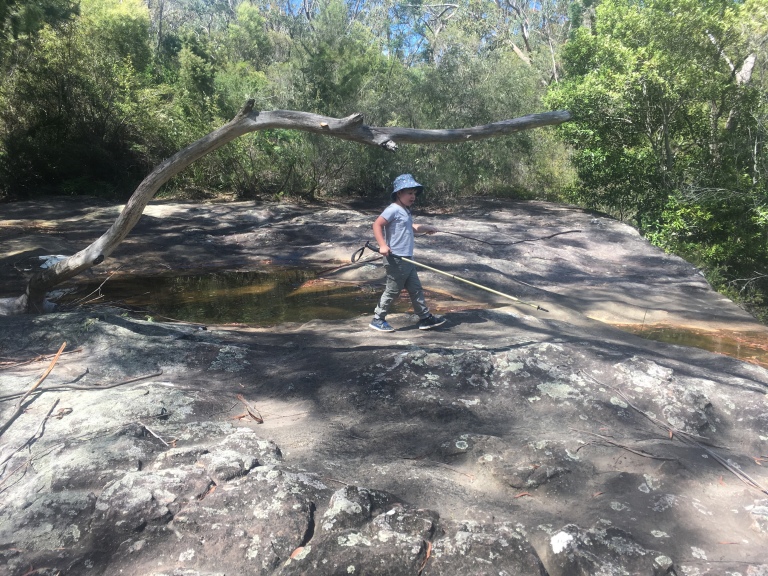 We then climbed down to the base of the waterfall by lowering ourselves down some large boulders, then fished for “seaweed” and had a snack. Just behind us was the checkpoint for the rogaining event and I resolved to get involved in one of these one day as they obviously take you to some amazing hidden places. 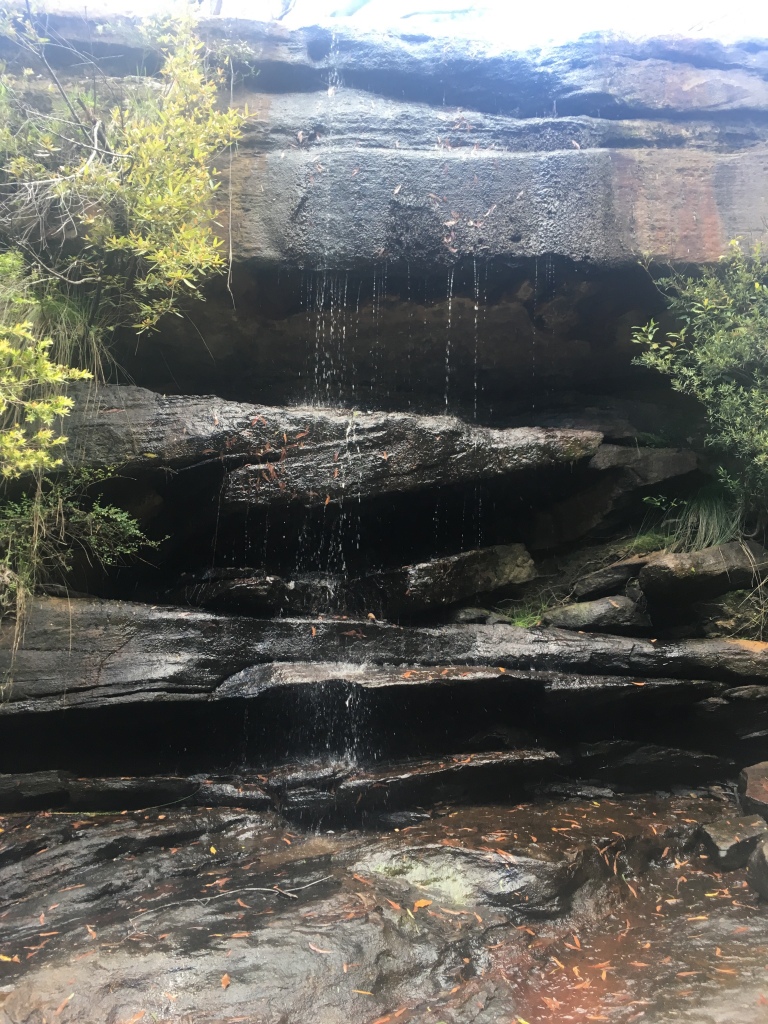 I noticed a cavity behind the waterfall and wanted to climb up for a better view but thought against it as I didn’t want to encourage my son to do crazy things just yet.

We climbed back up and splashed in the rock pools before heading back up the track. My son felt the climb but I just kept encouraging him and breaking up the return journey into little sections. He was tired but still eager to go and explore the old car so we took the side trail down. The trail crossed a small creek that led to the base of the waterfall and we then bushbashed until we found the old car. There was a geocache there but was unfortunately empty. My son had brought along a plastic animal as a swap and decided to leave it so other kids could find it. I like his decisions sometimes. Makes me feel like we’ve done something right. 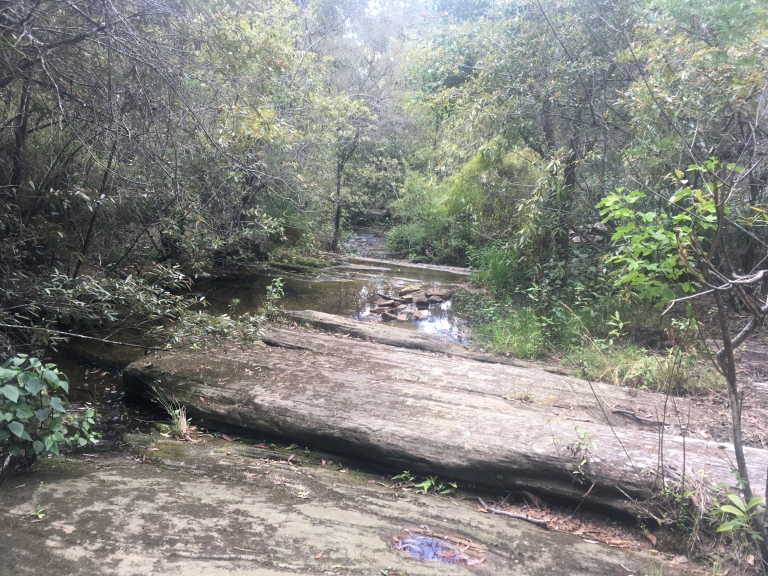 We then crossed back along the creek and walked the final part of the trail back to the car with my exhausted son leading the way saying “come on slow coach!”

Needless to say he needed an afternoon nap after all that!

It was a lovely morning spent with my son and an easy adventure for my 12 Hike challenge (The 12 Hike Challenge!).

Not to be outdone my daughter woke up the next day ask it to go on a walk so we hit the Turner Rd Firetrail and took in some amazing views. She wasn’t really into it, she just wanted a walk with Dad because her brother had done. I was happy to be out anyway and we saw some of the competitors doing the rogaining event and we found another checkpoint. 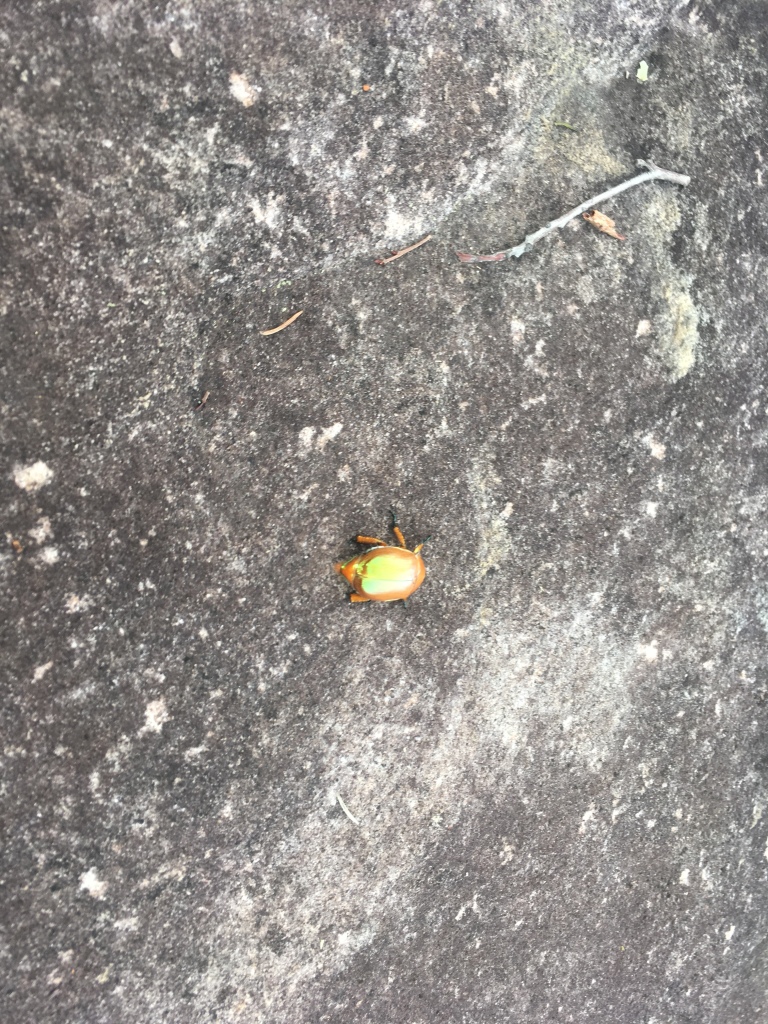 All in all, a lovely weekend of hiking!

2 thoughts on “12 Hike Challenge: A Trickle of a Waterfall”