How did I turn a four day hike into a two day hiking adventure? Read on…

I started out early Monday morning, taking the last shower I expected to have for four days. It’s not often I drive at 5am and the city was immersed in a dense fog. The traffic was light, most folks would be returning from their easter weekend not setting out so I had a clear run. Five and a half hours later I arrived at Jindabyne- a beautiful lakefront town at the doorway to the Australian snowy mountains. I collected a personal locator beacon from the visitors centre, grabbed a coffee from the amazing cafe next door then set off to drive the last half hour to Guthega. The lady at the park entry station advised that there could be 8cm of snow while I was out. This was worse than the light dusting predicted when I left so I knew I would have to make a decision on the weather at some point.

I arrived at Guthega, parking below the alpine inn, which was already home to some hopeful snow lovers waiting for a fall. (A word to those driving city cars- the road is very unsealed at times and I had to drive exceedingly slow to ensure I didn’t break it.)

Then I set out. I would be attempting a to walk a challenging four day hike from Guthega to the blue lake then around the main range circuit to climb Mount Kosiousco. Link to walk notes on wild walks website.

Wait..left my poles in the car. Went back for them. Then I set out..

The start of the trail was the established Illawong walk, which passed through some beautiful sub-alpine vegetation along side the snowy river to arrive at a disturbingly bouncy suspension bridge near the privately owned Illawong hut. You can see this on the video I’ll link to at the end.

The trail was dotted with large wombat holes(picture below) though I never saw a wombat. There were some delightful  red and grey birds that resembled finches darting between the bushes but they were a bit quick for the camera. The variety of plant life in one square meter was amazing and had me mesmerised for much of the trip.

I crossed a small metal bridge that was put in place to replace a flying fox that was used to cross the river (I think this was just a tributary) There were also numerous small metal grids that crossed many small streams. There had been rain recently so the streams were flowing nicely.

The illawong hut soon came into sight and the trail turned to the right to cross the suspension bridge. That wa a bit freaky. This was the first time I used the on-the-go pole stowing function on my Exos 48 pack and I’m glad it was there- I needed my hands free to grab on tight! When I stepped on the bridge the whole thing sank by 20cm. I walked very slowly across that bridge! It bounced slightly the whole way and I understood clearly why the sign said to only pass one person at a time. Looking down, the river was actually low enough to have allowed rock hopping but the banks of the river were quite steep. My wife has a fear of human-made see thru bridges in the wilderness, so she could possibly have avoided the bridge. Would have been an interesting discussion at the time I’m sure… 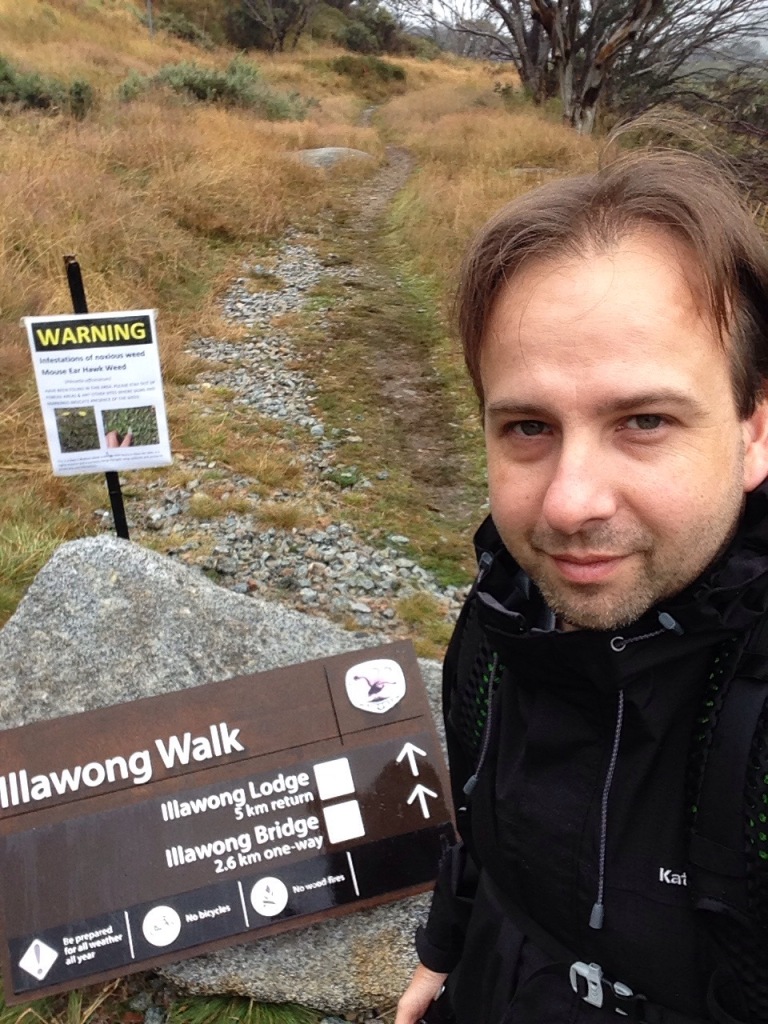 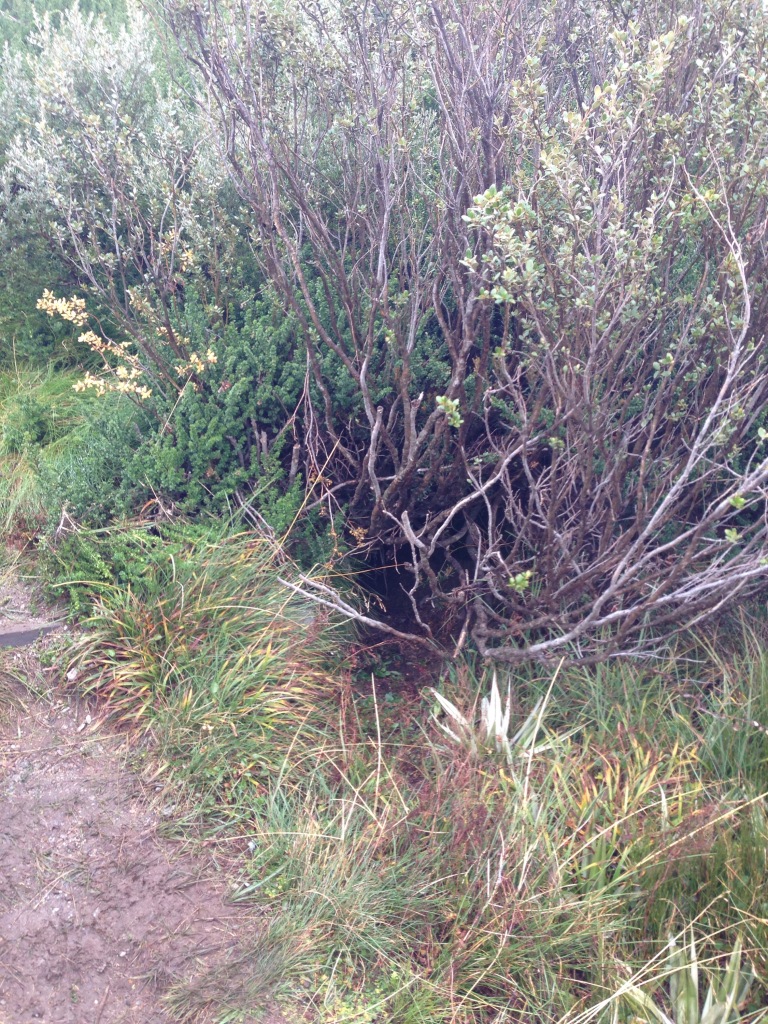 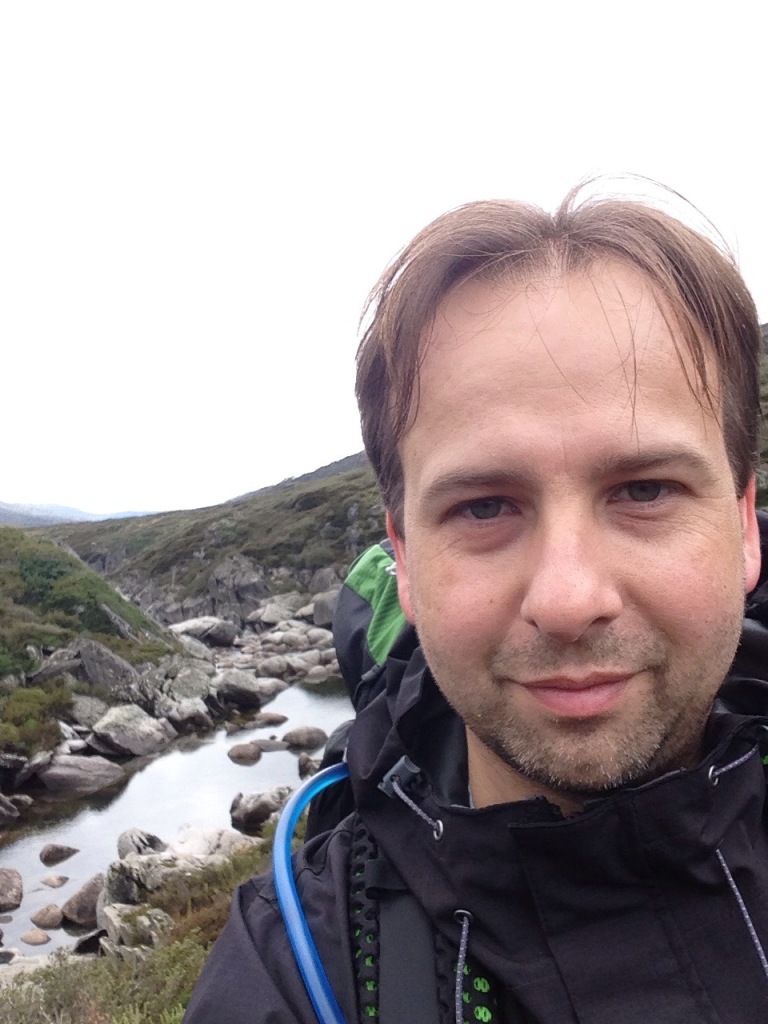 At this point the trail was meant to disappear but I could see a light one winding around the next hill so I followed it. The trail was quite clear in parts and almost vanished in other parts but was straightforward to follow.  I passed through a haunting snow gum tree line and carried on in the direction of pounds creek flats.

The gradient was increasing and the gentle stroll I had been doing was becoming more of an effort. I passed through a very boggy patch at which point I realised my eight year old North Face hedgehogs had completely lost their waterproofing. Soggy socks for the rest of the trip.

The trail was becoming fainter and seemed to curve in a direction that was seemingly taking me away from my intended campsite. Nothing for it but to pull out the map and compass and check it out. I was going in the right direction but everything in me was saying that I should be going further to the left. Trust the compass I thought. I passed a lovely grassy area that was sheltered by a hill and some large boulders that I thought might work as a backup campsite if pounds creek flats eluded me.

There were some reassuring trail ducks that led me part of the way then the track abruptly ended and I became quite concerned that I was going the wrong way. So out came my trusty compass and map again and I checked my bearing using the Illawong hut and pounds creek flats as my reference points. I just had to keep going the way I way going. I realised that the three trail ducks situated at the end of the track were also forming an arrow shape. I realised that much later though!

After I crested a hill the campsite lay in front of me. “Pounds creek flats,” I said out loud, it couldn’t be anything else.

It was an area of pondage that fed pounds creek and had some love grassy areas, boulders and was surrounded by two mountains and hills for shelter. I spent a few minutes checking the creek for water- lots of lovely fresh h2o flowing, then I wandered around looking for a spot to pitch the tent.

A young couple was already camped so I decided to park myself well away from them to give them some privacy. I found the perfect spot next to a boulder and set up. The sun was getting low on the horizon so I needed to get set quite quickly. I was quite pleased with my set up and started making a coffee and some dinner. Mental note: don’t bother with dehydrated trail meals again just get pasta!

It was getting cold so I put on my thermals and zipped myself into my cocoon sleeping bag. The sun set and I was out!

Wow I understand now why folks write these blogs in one day increments- it’s hard to tell the story in 30 words or less! So I’ll pause here. The more visually interesting, and much more painful, day two is still to come but for now I’ll leave you with the video footage I took of the first day of hiking: enjoy!