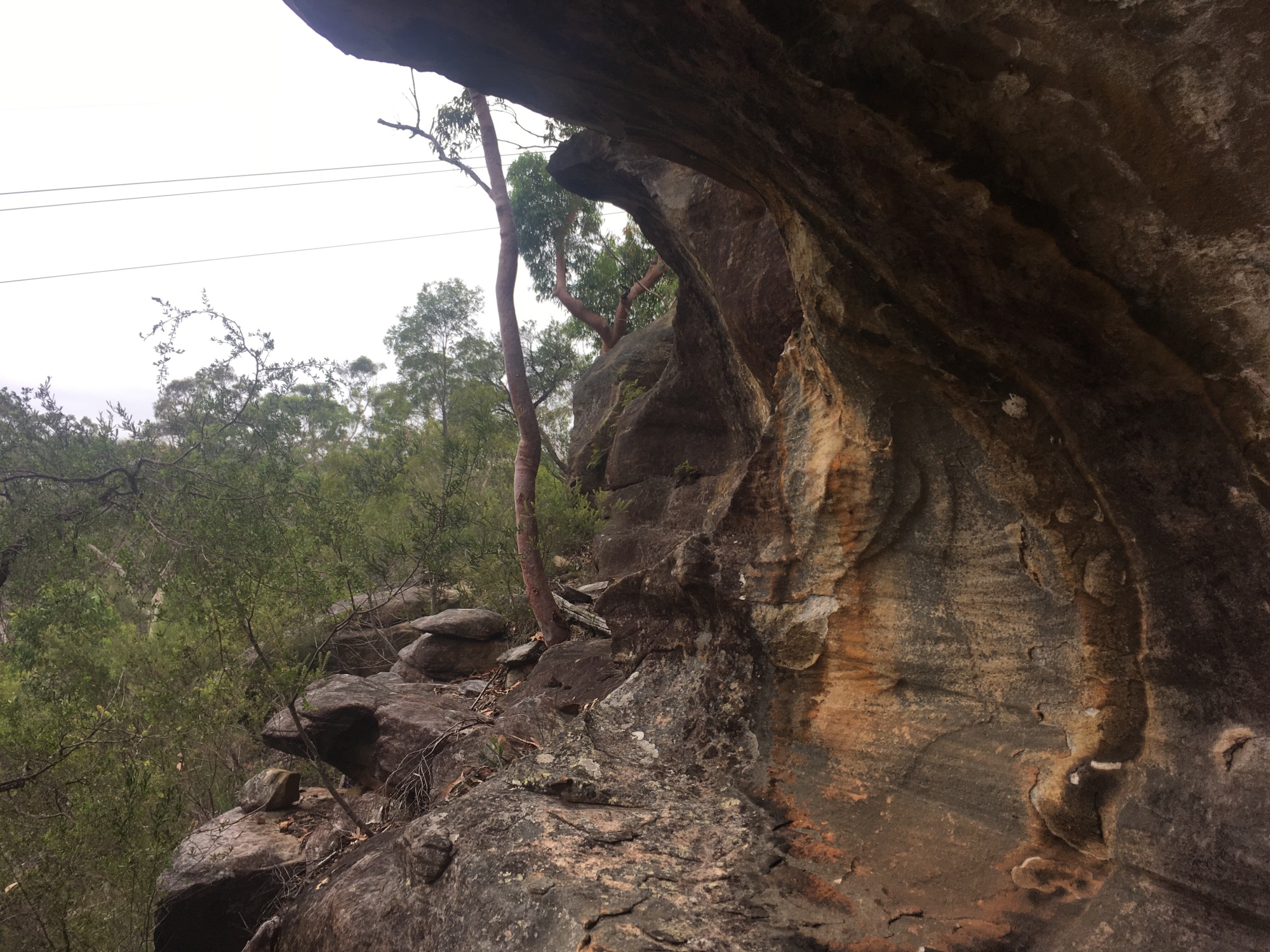 I wasn’t expecting much from this trail. It was just a short stretch of firetrail connecting Berowra, NSW to Mt Kuringai, NSW but I thought I’d give it a go for completeness sake as it was one of the few firetrails that I had not yet walked in the area. I guess anything is what you make of it as I ended up thoroughly enjoying myself. I should know by know that Berowra always holds surprises!

It was setting up to be a dull afternoon in front of the telly and I couldn’t handle that, so I pulled up my map and chose a short walk nearby. After parking I was greeted by a furious sounding dog who was thankfully tied up, but I walked on the other side of the road anyway. Upon entering the Bambil trail I noticed immediately the cliffs that rose up on my left. I kept walking a bit, strangely worried about snakes (do I smell them?), and snapping pictures of the bush. After a while the cliffs became a little more impressively cliffy (that’s a word now) and there appeared to be paths through the bush leading to them. I wasn’t sure if they were animal tracks so I kept walking until a more obvious route appeared. I realised I’d already made the decision to go climbing!

The route was a bit of a bush bash really, nothing truly defined. I climbed up some large boulders to the top of the first little cliff. Not much of a view but the rock face was interesting. Further back there were more cliffs. Ok then, let’s check them out, I thought. The view was a little better but of course, I could see some more cliffs, so I headed for them! I then stumbled upon an actual path that lead directly past the cliffs. I followed this path then spotted a rock cairn up on a ledge of a more substantial cliff. So I headed into the bush to reach the base and started climbing. It wasn’t a tricky climb, kids could do it, but it was well worth doing as the ledge was set in an overhang and the views of the surrounding bush were nice. I could see the path more clearly and checked the google maps satellite view to see where it led. It was hard to make out but it appeared to join up to the firetrail and at least headed in its general direction so I could figure out the way back rather easily (ie: cliffs are the wrong direction, down is the right direction!).

I snapped some pictures and headed to the path. I couldn’t find it of course! So, I looked for a route through the bush and noticed a clearish way that started at the end of the large boulder that I was standing on. I spotted a cairn and realised I had found the path again!

I followed this easily down to the firetrail and snapped a pic of the entrance for future reference.

Back on the firetrail, the walk was a bit ho-hum but I figured it wouldn’t take long to go to the end and back. There was a little side trip to a creek but there was little water flowing so I didn’t linger. I then noticed a well trodden path leading off into the bush. Ok then, let’s give it a go!

I was led along a lovely path that crossed creeks and passed between huge boulders. There seemed to be a part of the creek that would make a great waterfall when the flows were high, but for now it just looked like a rock face with a small trickle so I didn’t even photograph it. It would have required a little bushbash to get a good view and I didn’t think it was worth it. I’ll come back in winter and see if there is more happening. It was all quite lovely though really. I heard something in the bush that I first thought might be a wallaby but it was probably just a brush turkey. I had to hold back the temptation to head into the bush looking for the source of the sounds. There were more rock outcrops and little cliffs beckoning but I decided to stay on the path.

As I climbed up toward the town of Mt Kuringai I stepped onto a short power line trail to take in the view of the valley below. I eventually emerged into town a block away from the main firetrail and had to do a short road walk to rejoin it.

The return journey was really quick without all of the side trips! But this was obviously a place worth exploring off the track and I’m glad I did so. As I say, Berowra always surprises! I was out there for a little under two hours and took my time but I could have spent much longer exploring those cliffs!

Please consider purchasing from the following links – commissions will help to support this site’s upkeep and are much appreciated: