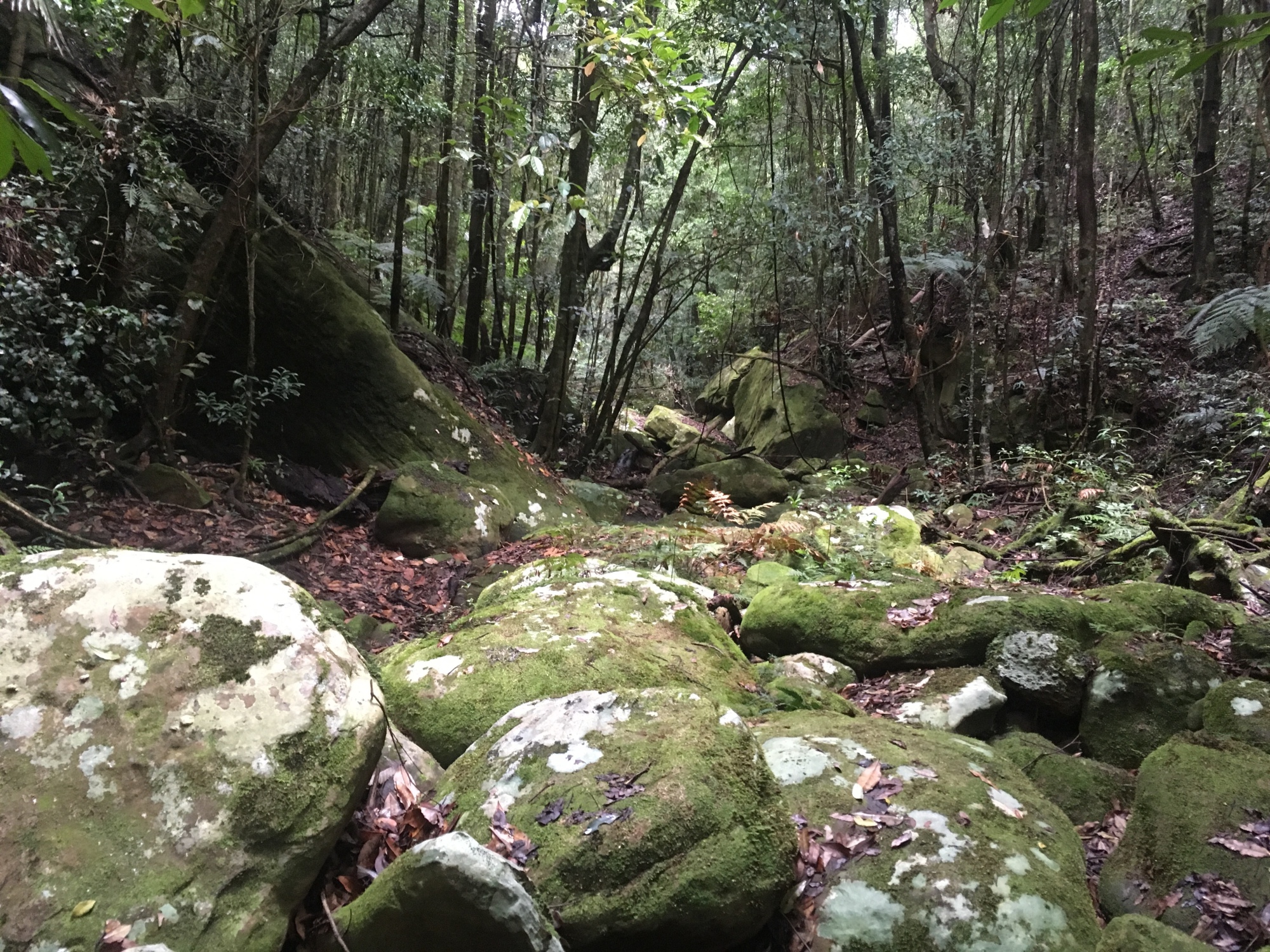 Finally I’m back on the Great North Walk! This walk is a 260km trek from Sydney, NSW to Newcastle, NSW and I’ve been walking it in sections for a few years now. I’ve hit the point at which public transport dries up and I either need to rely on others for pickups or spend a few nights in the bush. Fortunately the end of today’s walk is only an hour away from home so I was able to organise to be picked up.

It was another early start and I was on the train by 5:30am. I caught a bus with the tradies at Gosford an hour later and arrived at Somersby around 7am. I had a coffee and croissant (really yum!) at Somersby store before heading off.

There were a number of road walks on this stretch which is partly why I’d been putting it off for so long. The first roads passed some farmland and it wasn’t too long until I was walking in the bush. I entered the Palm Grove Reserve and had no idea what to expect. It became very pretty, very quickly! The birds were out in force with bellbirds ringing away and a cacophony of other birds all around. The trail took some quick sharp turns so I had to have my eyes switched on or I could lose my way. As I descended it became much colder but also strangely humid and I found myself sweating.

At the base of the valley was what looked like a rainforest jungle. Everything was wet and there were vines hanging from every tree. I came upon a massive small leaf fig tree (also called a strangler fig) with very wide buttresses and long viney tendrils hanging down. It was spectacular and I realised that I was thoroughly enjoying this section of the walk! 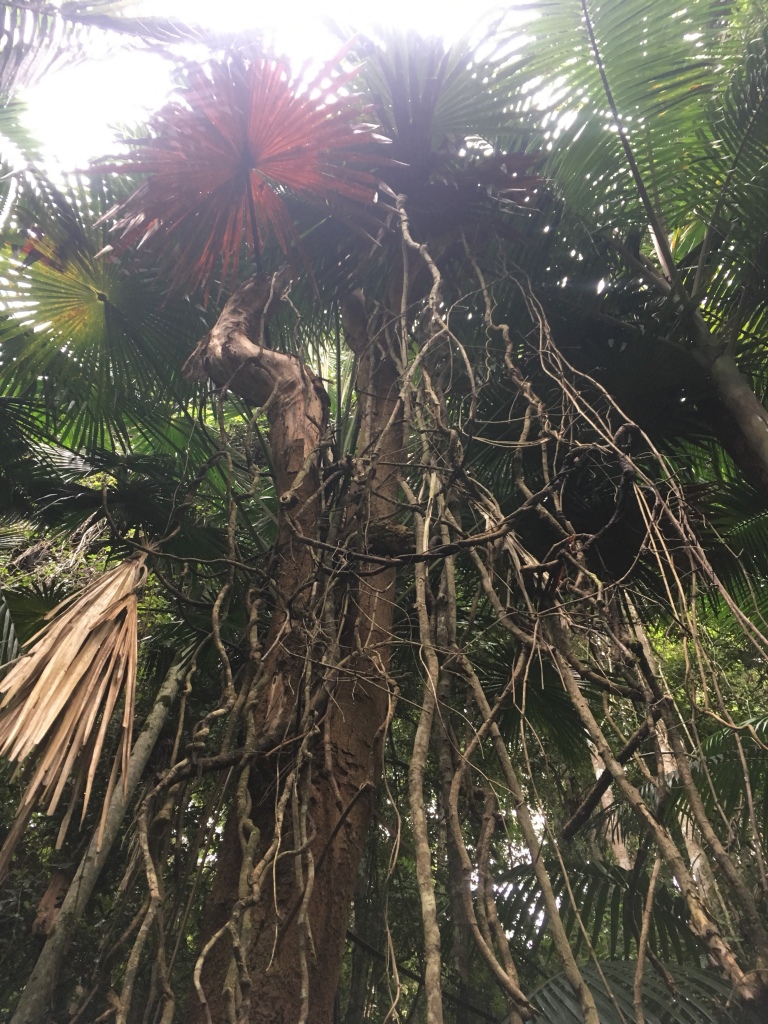 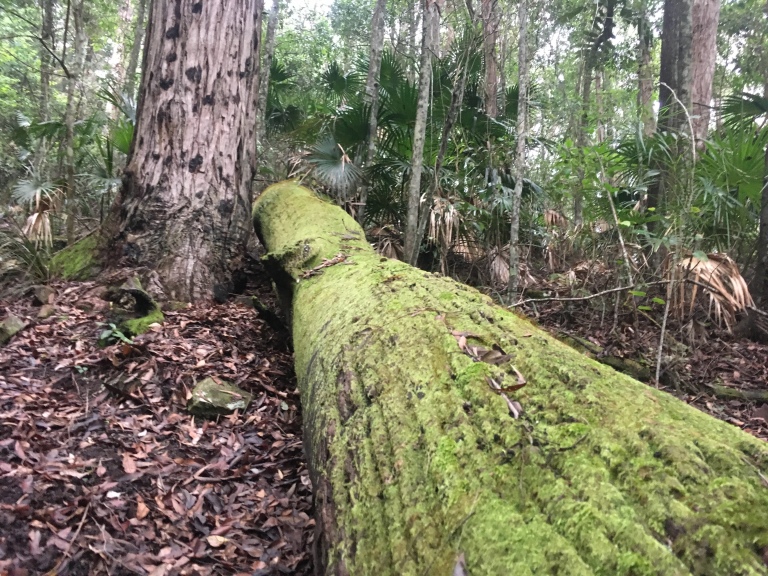 I then started climbing out of the valley, again surrounded by birdsong. I startled an Owl and it flew across my path to rest in a tree and regard me with its wide owl eyes. I’ve never seen an owl in the wild before so this was astonishing. It flew away before I could snap a picture. Somewhere along this track I heard a variety of different bird calls coming from the same location and suspected a lyrebird was there doing its mimic act. At the top of the rise was a walker registry so I signed and carried on to check out the nearby rest area. I thought that would be an awesome little overnight adventure. One could walk through the reserve, check out the fig tree and spend some time exploring then walk up the rise to camp before returning the same way the next day.

I carried on, not really tired at this point until I reached the end of the Palm Grove Reserve and began the next little section of road walking. I passed by some lovely little farms but I couldn’t help think of the bushland that had been destroyed to create them. Still it would be lovely to live there. A double bind.

The road soon became a track that followed Ourimbah creek. The horses that I saw back on the farms obviously used this track as there were hoof prints and other horse “evidence” to be found. It wasn’t really possible to see much of the creek as it was hidden behind the trees though there were access points where I could duck in and have a look. I suspected the horses used these to access the creek.

A bit further along I had a very weird feeling. Bits of trees were dropping to the floor, it was very dark and dank and something was rustling in the trees. Something was off and I just felt very uncomfortable. There was fox baiting in the area so maybe one was near. Can’t really explain it but I was glad when I had moved along a bit further and the feeling was gone.

Stringybark point was my next rest stop and there was a bench, fire pit and a couple of spots for tents. It would be a nice spot to break up the walk for an overnighter as it was roughly halfway and there was water in the creek (looked very clean).

I thought I saw a lyrebird and there were lots of little birds darting through the trees, keeping me entertained while I ate lunch. 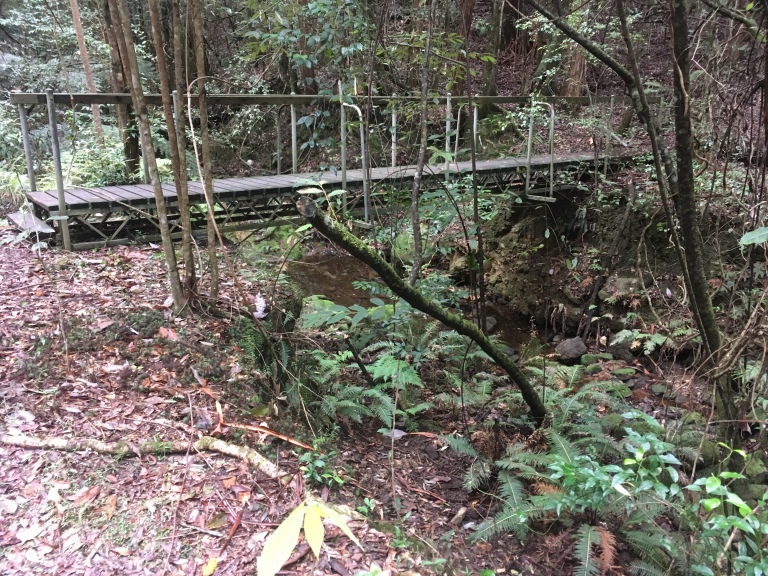 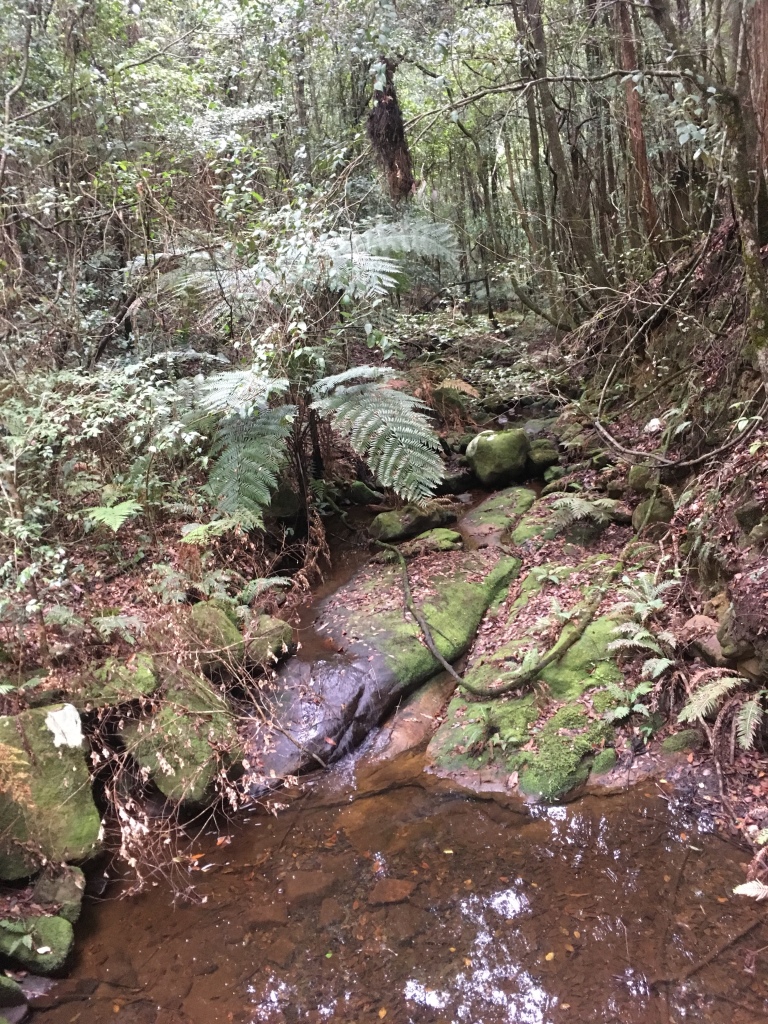 I had a large climb ahead of me. After I while I was fooled by a slightly flatter bit and thought I was at the top. I was only halfway! I could see from the heights of the surrounding ridges that I was nowhere near the top so I dragged myself up! There was a bit of rubbish lying around so I packed it out. I had forgotten a garbage bag but one of the bits was a mesh bag for baby bell cheeses so I stuffed everything in there. At the top, the walk followed the ridge line and was very easy going.

I stopped so another break at the Archers camp site, a spot with room for a large number of tents. The signage for the walk differed from one of the map apps that I use and I realised that it was using an older route. The app would get to Yarramalong quicker but would be a lot of road walking, so after checking my actual map I followed the official route which proved to be much more interesting.

The route descended into a lush moss lined valley filled with trees. A beautiful creek appeared at the bottom and the place was simply enchanting. There was a long fallen moss covered log suspended above the creek. The rocks and boulders on the creek bed were green with their own covering of moss and the gentle trickle of water made me stand still to just listen. I spent quite a bit of time there, almost meditating. It was so beautiful, so peaceful and so fresh that I had to just sit on a rock and breath it in. This is why I walk, to find such magic. 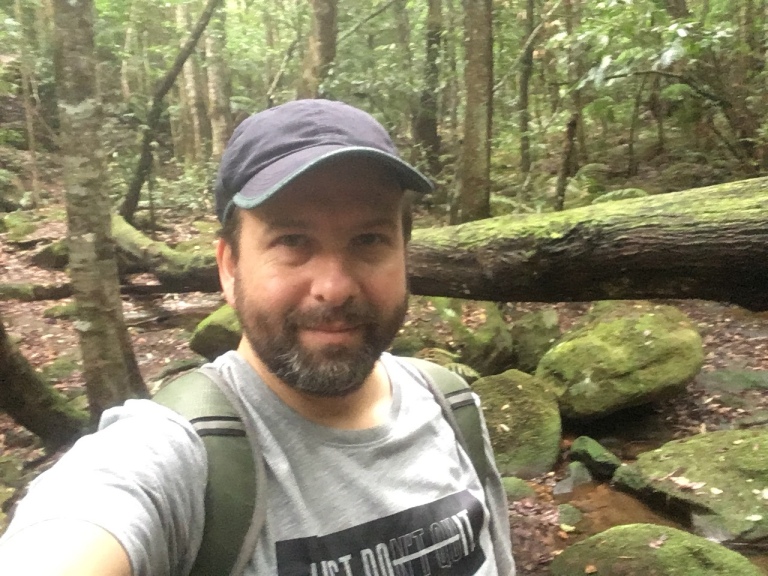 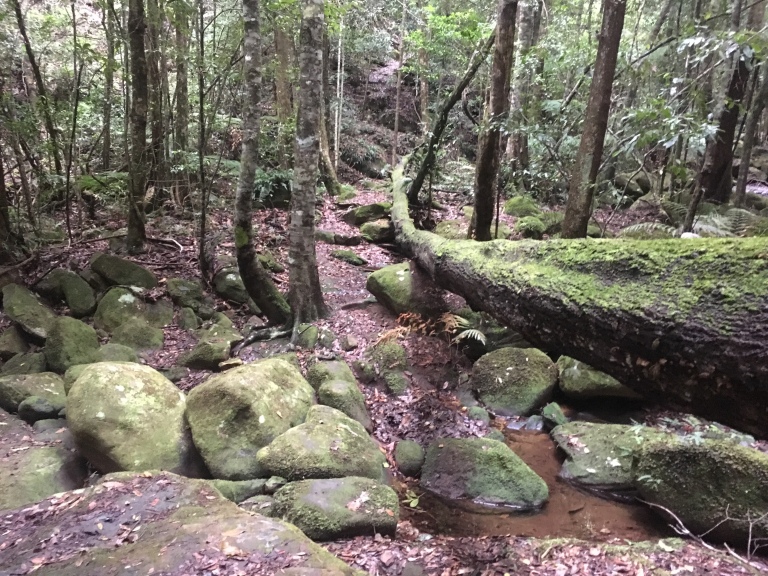 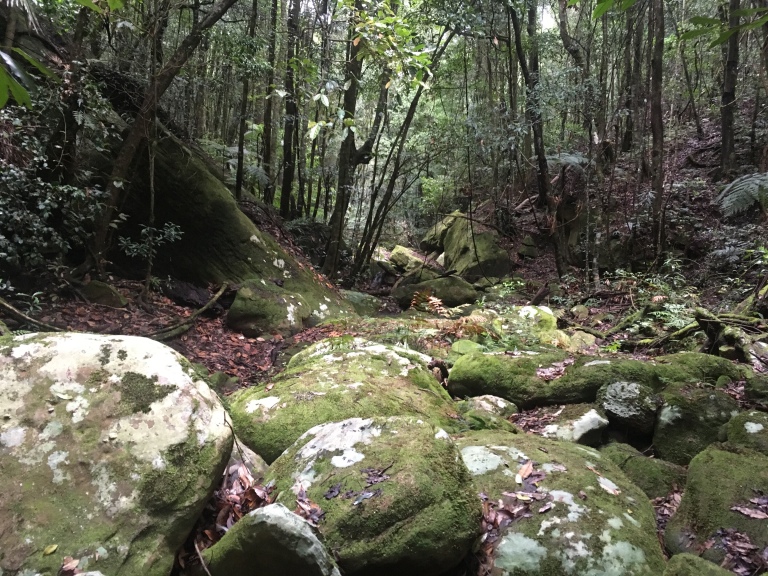 I tore myself away and headed back up out of the valley. The climb didn’t bother me much as my head was still down there with the mosses. 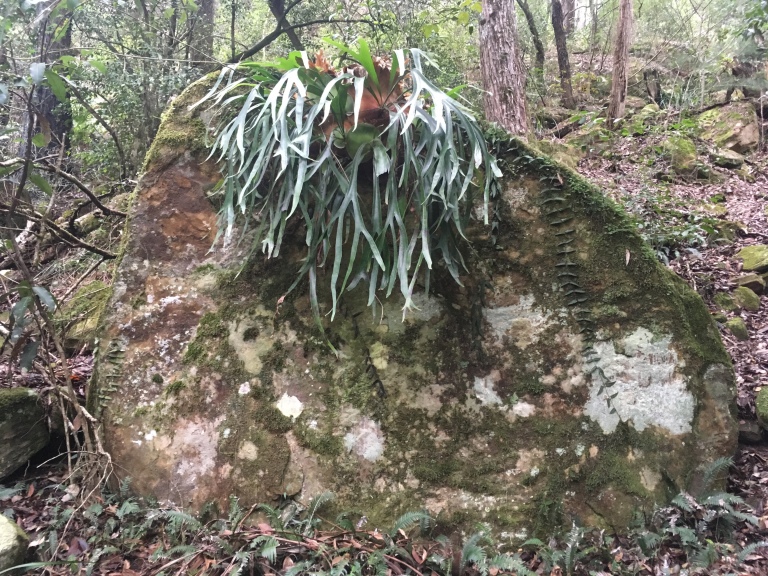 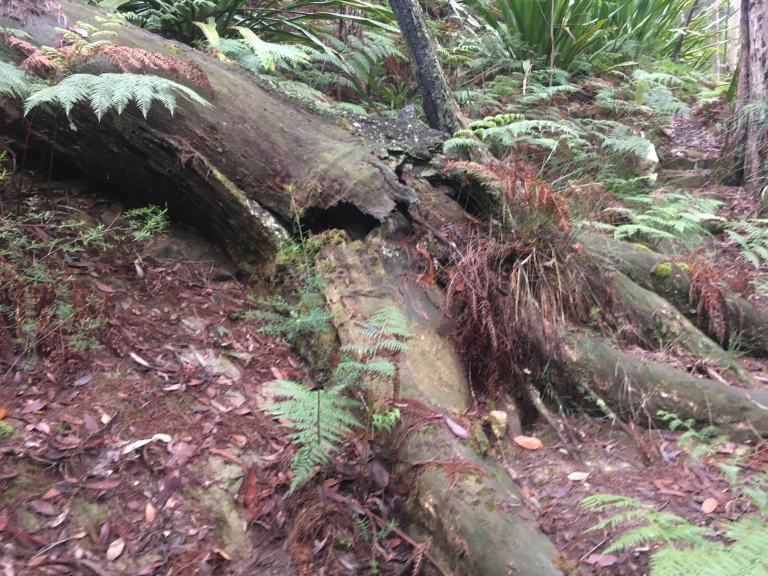 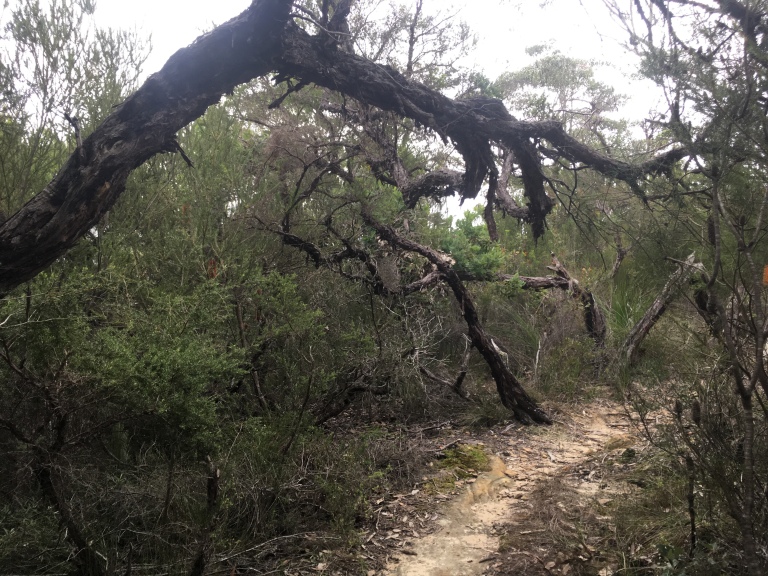 All too soon I was back on the roads passing farmland. I was beginning to tire and was walking much slower. I still had one more section of bushland to walk and I really considered avoiding it and just following the road to Yarramalong.

The entrance to the track was marked by an incredibly useless stile. There was a massive gap on one side and it was easy to walk around. I wonder if it had historical significance? This track started as a power line trail and as such the views opened up a bit. I followed it and was pleased when it turned back into a proper walking trail surrounded by trees. I believe it was called the Bramble Drey track. It became quite moist at times with water flowing down the sides of rocky cliffs to my right. There were wooden boards along the route as it was quite muddy beneath them and it would have been easy to slip off the cliff side with them! It was lovely but I was so tired that I wasn’t really seeing it. I stopped for a last snack on the steps of a short wooden bridge. This gave me renewed energy to finish the last few kilometres. 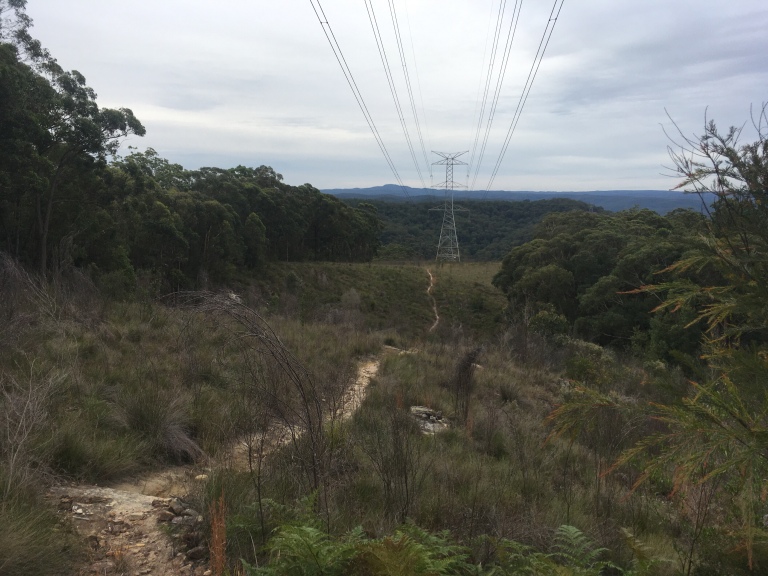 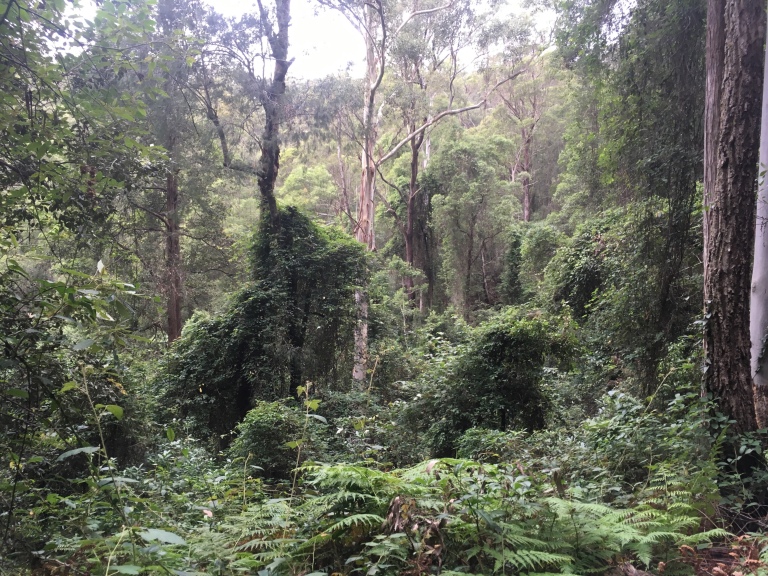 There was a short stretch of road walking and then suddenly I was standing in front of Yarramalong store and the end of my walk. I popped in for a coffee whilst I waited for my ride home and was met by very friendly staff who chatted to me about my walk.

This was quite a long section of the Great North Walk but there were some very lovely parts that made it worthwhile. I saw an Owl, an amazing strangler fig tree, a lovely moss filled creek and had a fantastic coffee at each end!

It was great to be back on the Great North Walk again. I’m hoping to finish it all this year. I shot a lot of video today so I’ll post that separately once I edit it. This walk was also my June contribution to my 12 Hike Challenge, and I had chosen my list of walks to push me to finish this trail. Strategy working!

Next up: Yarramalong to ….?