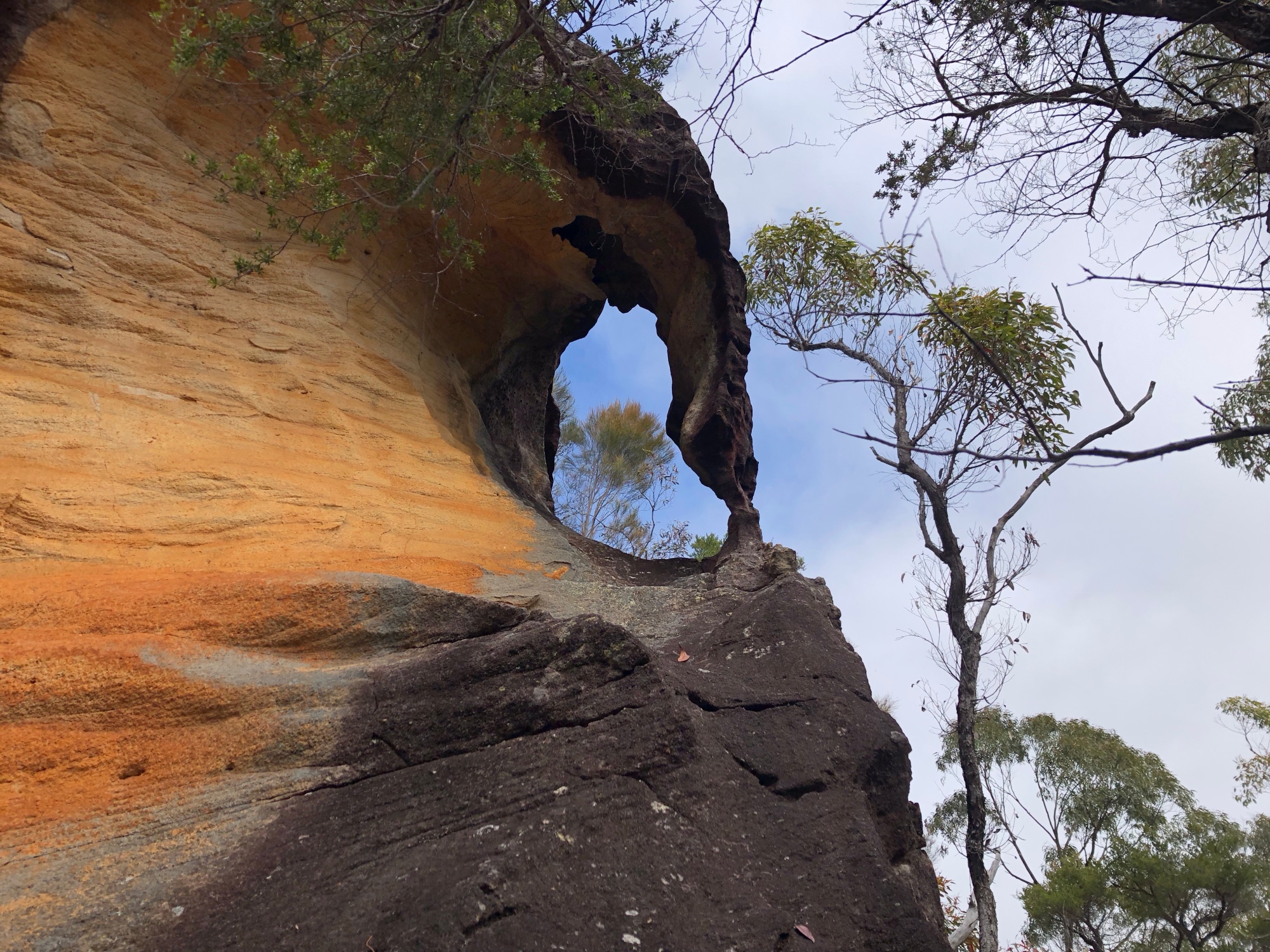 I’d been struggling with motivation all week. I wanted to do an overnight hike at the Warrumbungles but the weather and the thought of a 5-6 hour drive drained me. Flood warnings killed my plan earlier in the week and I just couldn’t motivate later in the week. So I decided to get off my butt and try to find some off track Aboriginal sites that I had heard about.

I’d been studying maps for quite sometime and had located an interesting spot that I though might provide some interesting views. I realised that the location resembled some photos I’d seen of the Aboriginal sites I’d been looking for so I decided to check it out.

I’ll start off by saying that I will tell this story without giving away the location of the sites, as they are not publicly showcased, in order to help protect them. I found them using online research and off track exploration. I’ll link to a video clip at the end. I’ll try not to give too many location cues in my descriptions.

It look me a while to figure out the best spot to leave the track as there were many cliffs to fall down. Whenever I go to make a bad move my mind says “nope, you’ve got kids”! I hope that instinct stays with me as it’s great for safe path finding!

I found a route and after around twenty minutes I was standing at the spot I was aiming for. The view was amazing and it was like I was in the middle of nowhere with no signs of people or houses. I sat there for a bit and had a snack, soaking in the view. I search around and was rewarded with the first find – an engraving of a shield in the rock!

Actually, I call it a shield, but I have no idea really. It could be the shape of a water carrier and indicating that water was near, something that makes sense in hindsight, but is likely just my mind working overdrive.

I spent a lot of time clambering around the rocks locking for the second site, a rock shelter. From above, every large rocky area looked like it could have been it but once I was standing in front of it there was nothing. After forty minutes I almost gave up. Then I spotted a feature that made me give it one more try. It wasn’t it. I could hear some water trickling though so I decided to follow the water.

I found what I was looking for and it was more spectacular than I could have imagined. It was a huge rock shelter with water drizzling down from above. I could see some markings on the lower back wall. There were three wallabies drawn on using charcoal. There were other marks that I couldn’t make out near them. I walked the length of the shelter. It started raining briefly and I was able to use the shelter to stay out of the rain! I found another set of charcoal pictures, either a whale, a fish or possibly two wallabies overlapping?

I also found a few stick figures drawn on the outer rock, likely drawn in more modern times as they were of lesser quality of design and basically looked like someone had let their kids deface the site. On the back wall, I saw what I thought could be a possum drawing but it was hard to make out and didn’t come up well in the photos.

The people who used this site sure knew how to pick a spot! Shelter from the rain, running water for drinking and cleaning, a view of the land to help spot wildlife for hunting, this place had it all! It was beautiful too. Pictures and video at the end of this post.

The rain stopped and I decided to make my way out. I came to a halt as something wasn’t right. In front of me was a snake curled up in the grass. It was a Death Adder. I guess no place is perfect! It wasn’t moving but I of course took a very different route out. I tend to walk slowly and deliberately if I’m off track as I’m aware there are snakes like this in the area so I’m glad that paid off and allowed me to see it well before I would have stepped on it. I saw no others nearby.

I picked up a rock that looked like an arrow head, but it was likely just a rock. In any case it was returned to where I found it.

I hit a wall on the way out, a literal wall of rock, so I had to walk along it until a path out became clear. It turned out to be the exact same spot I came in on. I love path finding off track as it forces you to read the land consider every footstep.

Today was a fantastic day and I’m glad I got motivated enough to get out and do this, it was incredibly rewarding. Thanks for reading, I recommend checking out the short video at the end to get a feel for the beauty and peacefulness of the site.

One thought on “A bushbash to find Aboriginal sites”