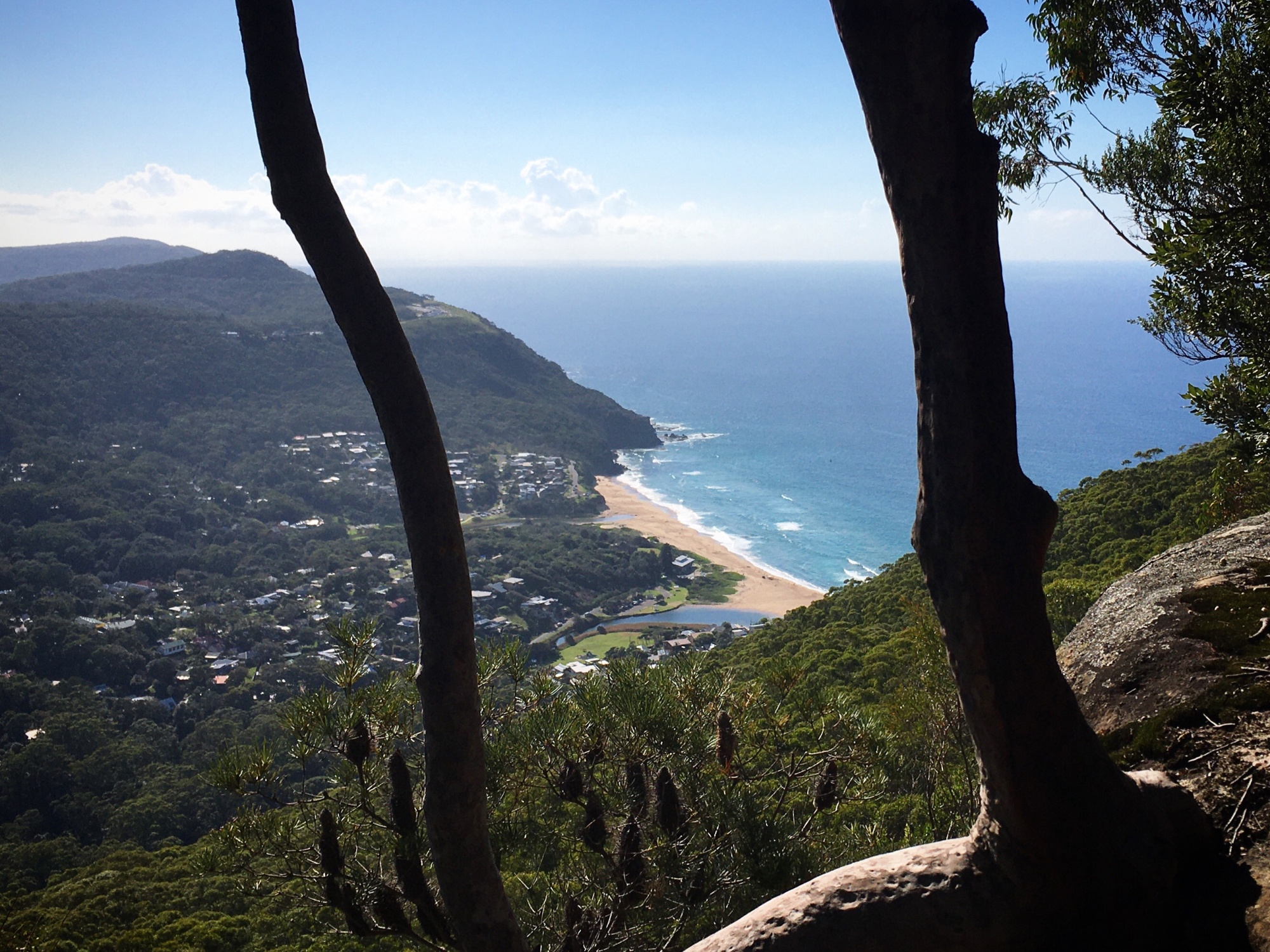 This Anzac Day, I decided to do a section of the Great South Coast Walk from Stanwell Park to Austinmer. I’ve already done the Royal National Park Coast Track and I might just carry on one day and fill in the blanks of this section all the way to Wollongong! And then keep going! But today it was to be 17km and a climb up and down the magnificent Illawarra Escarpment. It’s a very photo heavy post so you might need to give it a moment to load. I also made a 17min YouTube video!

The birds were active this morning. As I began the climb up from Stanwell Park station (the track begins on the platform), the trees were rustling and little birds darted across my path. The forest was alive with tweeting, it was so lovely.

The trail descended again removing most of my gains but led me to Stanwell Creek and the clearest, most inviting little pool I’ve seen in a long time. The water was crystal clear and flowed in via two little waterfalls. On a warmer day it would have been lovely to go for a dip. My photos don’t really do it justice – it felt amazing to be there listening to the water trickle. I stayed for a quick snack and just took it all in.

And then the climb began in earnest and I have to admit I started struggling a bit. I knew from the map that there was a substantial climb but I hadn’t factored in that I still don’t have my pre-work-from-home fitness back! Looking across to the adjacent ridge, which I knew to be the same height, I could see that I wasn’t even above halfway up.

Fortunately, the trail provided another distraction. After crossing a little trickle of a creek I heard the unmistakable sound of a small waterfall. I walked up the creek about ten meters and around a boulder and found it. It was the right size for a shower and the boulder offered some privacy! I cooled myself down with a splash but left the showering till later!

As I neared the top I was met by a huge cliff face and a rock shelter, which I explored a little. The vegetation started to change as I reached the ridge top. There were more wildflowers and Gymea Lillies and less vines (strangler figs?).

And then finally, some views! There were many short side trails that led to good vantage points. It was surprisingly busy up there so I kept leap-frogging the same people. The first spot had a view over Stanwell Park and showed me just how far I still had to go! I was tired already. There was a railway bridge disappearing into the hillside and I couldn’t help but think of the Hogwarts train. The next view was over Coalcliff and I could see the remains of the old coal mining equipment.

I was very tired but the next part of the track was relatively flat. My knees and my calf muscles were starting to hurt and I still had a fair way to go, but I seemed to make good progress from here on. I passed over a boardwalk section and carried on through the forest. At one point I thought I saw the biggest cockatoo perched on a branch in front of me. It turned out to be a white branch and I had a giggle to myself. I finally reached Sublime point, where I sat for a welcomed and much needed coffee. The view here was lovely but the clouds moved in and it became quite cold so I started the final part of the walk, the descent to Austinmer.

The National Park website mentioned ladders and steps but it could have been a little more open about the situation! It was essentially a 400m drop requiring 6 or more long vertical ladders clinging to the cliff face and about a billion steps zigzagging the rest of the way. It hurt! My knees and the rest of my legs complained the entire way down. Of course there were people running up and down it like it was nothing. LI overheard one superhero saying he was doing it wearing a weight belt as he was training to be a strongman of some sort. Nutters the lot of them! I was exhausted! I could barely walk it let alone run! Crikey I needed to get my fitness back, this was ridiculous!

Finally at the bottom there was just a short road walk left to Austinmer station and I managed to time it right to catch the hourly train.

I had originally planned a 30km hike up near Nelson Bay but changed plans due to some track closures. I’m glad I hadn’t gone ahead with it as my personal fitness is clearly an issue. I usually can do the walks within the planned times (using Naismith’s rule) but I was a least an hour over that estimate. It was definitely a challenge anyway due to the elevationl but folks were gliding by me without a care in the world whilst I plodded on averaging for the entire trip 2.5km per hour! Being back in the office three days a week will help as there are lunchtime walks and a 2km walk home in the evening to start me off. There are a huge number of local trails I can walk also to build me back up again. I’m not sure how many wake up calls I need to start working on improving my health but this walk definitely slapped me around a bit so hopefully I can motivate myself to get fit. No excuses – I want to walk!